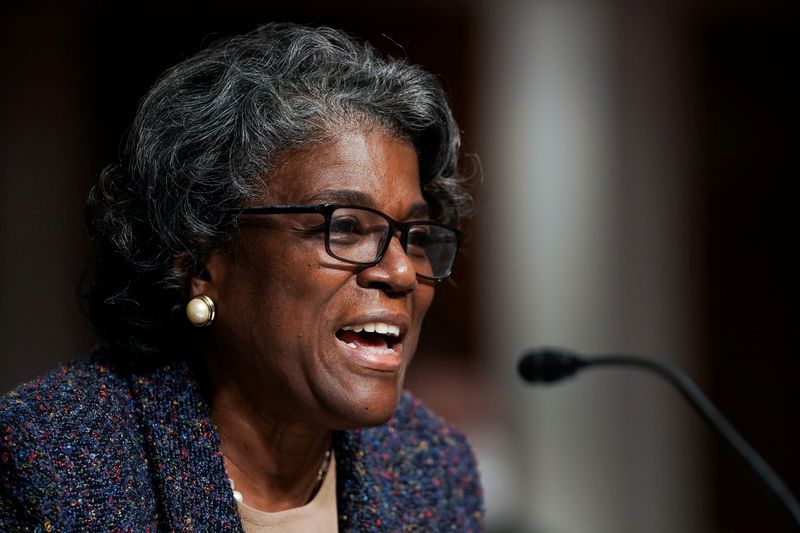 FILE PHOTO: Linda Thomas-Greenfield speaks before the Senate Foreign Relations Committee hearing on her nomination to be the United States Ambassador to the United Nations, on Capitol Hill in Washington, D.C., U.S., January 27, 2021. Greg Nash/Pool via RE

WASHINGTON (Reuters) - The U.S. Senate voted on Monday to advance the nomination of President Joe Biden's pick to be ambassador to the United Nations, Linda Thomas-Greenfield, clearing the way for a vote on her confirmation on Tuesday.

The tally was 75-20 on a procedural measure to end debate. All 20 of the "no" votes came from Republicans.

Thomas-Greenfield, 68, is a 35-year veteran of the Foreign Service who has served on four continents, most notably in Africa.

Republicans who opposed her nomination have focused on a 2019 speech she gave that some said was favorable to Beijing. Thomas-Greenfield and her supporters pushed back, citing her decades as a diplomat seeking to increase U.S. influence and counteract China's.

At her confirmation hearing in late January, she stressed the importance of U.S. re-engagement with the 193-member United Nations in order to challenge efforts by China to "drive an authoritarian agenda."