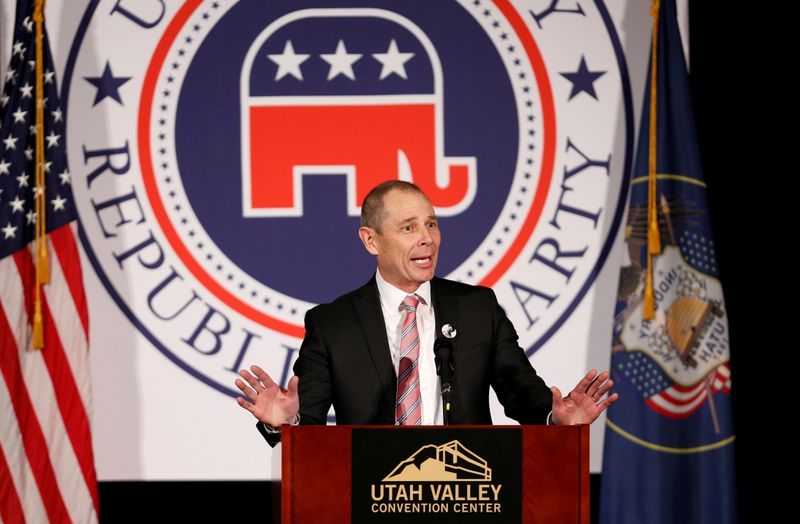 WASHINGTON (Reuters) - More than 50 Republicans in the U.S. House of Representatives on Wednesday formed a group to discuss how to use the free market to fight climate change, in an example of a growing willingness of some in the party to consider tackling global warming.

Led by Representative John Curtis of Utah, the Conservative Climate Caucus includes representatives from every committee in the House with jurisdiction over climate policy. Democrats narrowly control the House.

Curtis said the group, which represents about a quarter of the Republican caucus in the House, aims to bring Republicans together to discuss using innovation and resources to cut greenhouse gas emissions while boosting prosperity. "We do care about climate, and we already have solutions and plan to find more," he said.

Some Republicans, however, have downplayed the severity of the climate change issue while others have branded it a hoax. Former President Donald Trump was dismissive of the problem as he dismantled climate policies and regulations on fossil fuels.

But some of Trump's fellow Republicans helped pass the Energy Act of 2020, which included measures to boost technologies such as carbon capture and storage and renewable energy.

President Joe Biden, a Democrat, is hoping to push through more climate initiatives in a $1.7 trillion infrastructure bill, but Republicans in the Senate, where Democrats have effective control, have said such proposals do not count as infrastructure. If the measures do not make it into the wider bill, Democrats could look to pass climate initiatives on a party line vote in legislation through a procedure called budget reconciliation.

Conservatives are also organizing at a grass-roots level to promote what they say are private-sector solutions to climate change. Earlier this month the American Conservation Coalition, held what it billed as the countryâs first conservative climate rally https://www.reuters.com/world/us/us-conservatives-stake-claim-climate-activism-with-miami-rally-2021-06-05 in Miami.

The fixes being pushed by conservative activists and lawmakers include constructing more buildings out of wood, planting a trillion trees around the world, increasing use of emissions-free hydropower, and expanding research and development of advanced nuclear power.