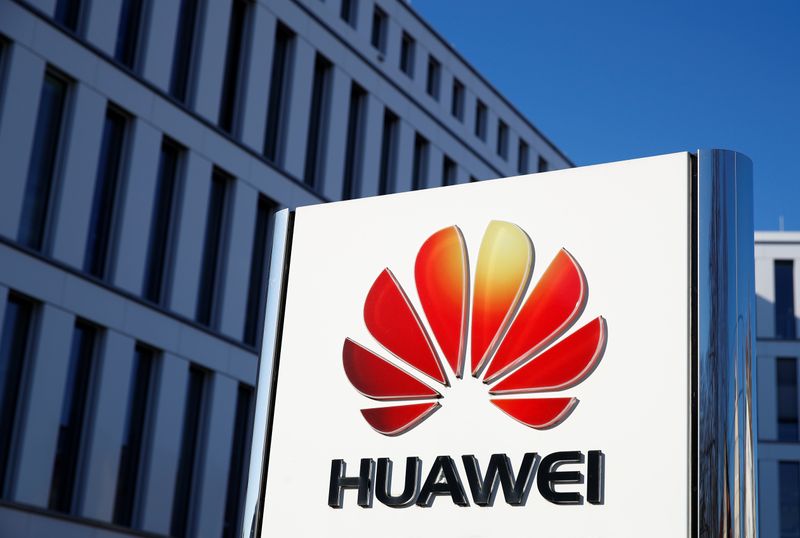 FILE PHOTO: The logo of Huawei Technologies is pictured in front of the German headquarters of the Chinese telecommunications giant in Duesseldorf, Germany, February 18, 2019. REUTERS/Wolfgang Rattay

The FCC last year adopted rules requiring U.S. telecom carriers to remove and replace equipment produced by Huawei or ZTE if purchased using an $8.3 billion government fund, but carriers could still purchase equipment from the Chinese companies with private funds.

Carr, a Republican, called for closing the "glaring loophole ... It makes no sense to allow that exact same equipment to get purchased and inserted into our communication network as long as federal dollars are not involved."

Huawei said in a statement that "extending the FCC's evaluation and approval process to prohibit equipment that is already accredited by the FCC is misguided and costly to American companies."

It said blocking equipment based on where it was assembled is "discriminatory and will do nothing to protect the integrity of U.S. communications networks or supply chains."

Carr also said the FCC could do more to address China's abuses of ethnic and religious minorities, especially against Muslim Uighurs in Xinjiang.

He said the agency's equipment authorization rules should be updated to require companies that procure devices or components from Xinjiang "meet a heightened burden to ensure that their supply chain does not rely on any forced labor," Carr said.

Acting FCC Chairwoman Jessica Rosenworcel "has long advocated for reforming the equipment authorization process to better ensure security in new network devices and is pleased to see growing support for this idea," an agency spokesman said, adding that "the FCC is already working on addressing many of the issues Commissioner Carr spoke about."

The FCC in December finalized rules requiring carriers with ZTE or Huawei equipment to "rip and replace" that equipment. U.S. lawmakers have approved $1.9 billion to fund replacements.