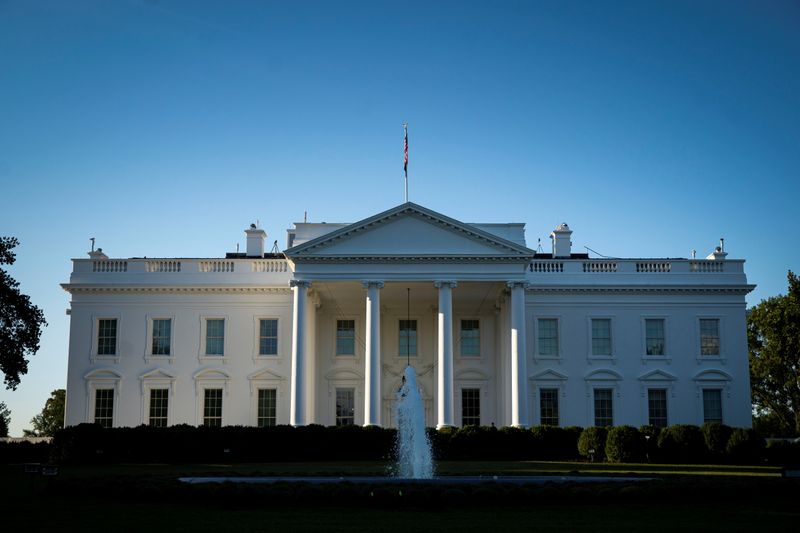 A general view of the White House in Washington, U.S., October 2, 2021. REUTERS/Al Drago

WASHINGTON (Reuters) -Congressional Democrats face the hard work of paring back the White House's sweeping infrastructure and social agenda in the week ahead, but have yet to agree on a target size for their multi-trillion dollar spending bill.

Democrats said on https://www.reuters.com/world/us/democrats-struggle-reach-deal-congress-bidens-agenda-2021-10-01 Friday that their sweeping bill intended to bolster the social safety net and fight climate change will need to be trimmed from a $3.5 trillion goal, perhaps to closer to $2 trillion, following a visit by the president to Capitol Hill to sell his agenda.

But they have come no closer to agreement on that figure over the weekend.

Progressive Democratic Senator Bernie Sanders, chairman of the Senate Budget Committee, told ABC News Sunday that $3.5 trillion "should be a minimum. But I accept there is going to have to be give and take."

Moderate Democrat Joe Manchin said his top line for the package is $1.5 trillion, while fellow moderate Krysten Sinema has not committed publicly to a number.

Addressing Manchin's $1.5 trillion limit, the influential chair of the 95-member Congressional Progressive Caucus, Representative Pramila Jayapal, told CNN Sunday: "That's not gonna happen. Because that's too small to get our priorities in. So, it's gonna be somewhere between 1.5 and 3.5 (trillion dollars)."

Biden, who has said he will "work like hell" to get the legislative package passed, travels to Michigan on Tuesday to rally support for it, the White House said Sunday. Michigan has a congressional delegation that in some ways represents the broad scope of the Democratic party, from moderate Representative Elissa Slotkin to progressive Representative Rashida Tlaib.

Howell, Michigan, where the president will visit, is in Slotkin's district.

Some Democrats will inevitably be disappointed, a senior White House official said Sunday.

"People will not get everything they want, that is the art of legislating, but the goal here is to get both bills, and weâre going to fight until we get both bills," Cedric Richmond, director of the White House Office of Public Engagement, said on NBC's "Meet the Press" Sunday.

After earlier agreeing at moderates' urging to hold a House vote last week on a $1 trillion infrastructure bill that passed the Senate in an August bipartisan vote, House Speaker Nancy Pelosi canceled the vote Friday at the urging of progressives who want both bills to move in unison.

Senate Majority Leader Chuck Schumer said on Sunday the goal is to get both the infrastructure and social spending bills done in the next month. Congress also needs to act in the next month to save the federal government from a catastrophic debt default.

Tensions remain high among Democrats. Sinema on Saturday slammed party leadership for delaying the vote on the bipartisan infrastructure package, saying the decision was "inexcusable" and eroded trust. That vote should be held "well before" Oct. 31, Pelosi said Saturday.

Both Jayapal and another prominent progressive, Representative Alexandria Ocasio-Cortez, said Sunday that one way to trim the social spending plan would be to fund some programs for a shorter time period than originally envisaged.

But they both also suggested the proposals to fight climate change were not negotiable.

Democrats have limited time to reach agreement on the larger bill, as they face several other deadlines in the weeks ahead.

The most critical comes first. The Treasury Department has warned it will be unable to pay its bills by around Oct. 18 unless Congress acts to raise or suspend the $28.4 trillion debt limit. That could trigger a historic debt default that would take a heavy toll on the United States and world economies.