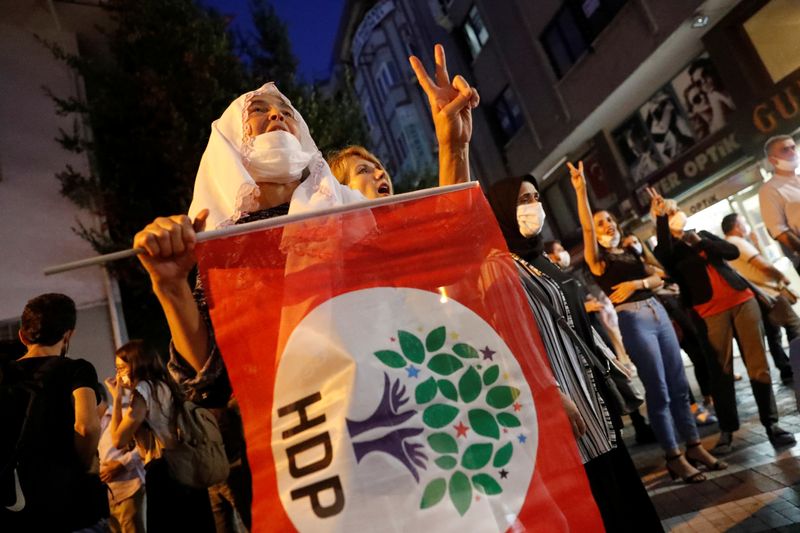 FILE PHOTO: Supporters of pro-Kurdish Peoples Democratic Party (HDP) shout slogans during a protest against the arrest of 82 people including members of their party, in Istanbul, Turkey September 25, 2020. REUTERS/Murad Sezer

ANKARA (Reuters) - Turkey's government plans to shut down the pro-Kurdish Peoples' Democratic Party (HDP), the ruling AK Party's deputy parliament chairman was quoted as saying on Tuesday, the most senior official to endorse nationalist demands for its closure.

President Tayyip Erdogan's government and its nationalist MHP allies accuse the HDP of links to the outlawed Kurdistan Workers Party (PKK), accusations that escalated after Ankara said Turkish captives were killed by the PKK in Iraq last month.

The MHP have repeatedly called for the HDP's closure over links to the PKK, which Turkey, the European Union, and United States designate a terrorist organisation.

The HDP denies the accusation. The third largest party in parliament, it has also faced a barrage of legal bids to lift the parliamentary immunity of its lawmakers.

"God willing, we will shut down the HDP in the eyes of the people," Cahit Ozkan, a deputy parliamentary group chairman for Erdogan's AKP, was quoted as saying by the state-owned Anadolu news agency.

"Our people have lost hope in this party. All 83 million are demanding that this party be politically shut at the ballots and legally within the framework of the constitutional order."

Ozkan's remarks come after Erdogan, whose government has faced criticism from rights groups and Western allies over backsliding in democratic freedoms, announced plans to strengthen the right to fair trial and freedoms of expression.

Earlier on Tuesday, MHP leader Devlet Bahceli reiterated his call to shut the HDP and called for measures to prevent it re-establishing under a different name, as it has done before.

"The HDP's closure is urgent, vital and mandatory," Bahceli said. "From head to toe, the HDP is in the swamp of corruption and terror".

The crackdown on the HDP has included arrests of thousands of party officials and members, while dozens of its elected mayors and lawmakers have been ousted.

The PKK has waged an insurgency in the mainly Kurdish southeast Turkey since 1984 and more than 40,000 people have been killed in the conflict.