Trump lashes out at McConnell in deepening feud between top Republicans 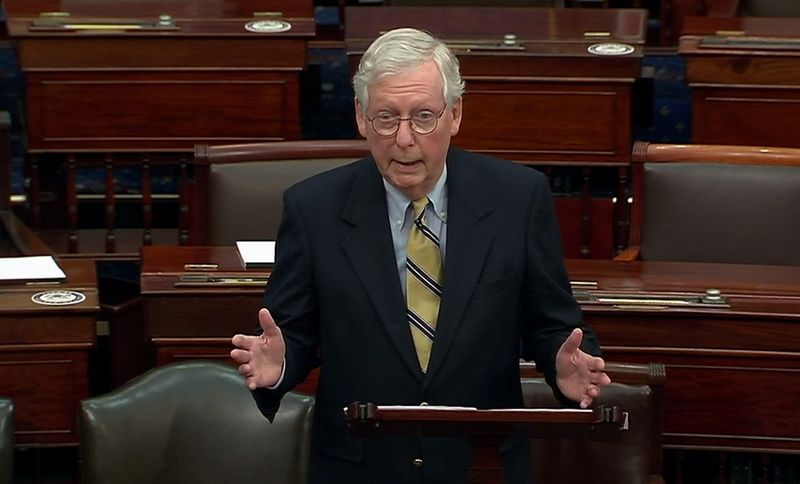 FILE PHOTO: U.S. Senate Minority Leader Mitch McConnell (R-KY) speaks about former U.S. President Donald Trump, accusing him of dereliction of duty, immediately after the U.S. Senate voted to acquit Trump by a vote of 57 guilty to 43 not guilty, short of

By Steve Holland and Susan Cornwell

WASHINGTON (Reuters) - Former President Donald Trump lashed out at Senate Minority Leader Mitch McConnell on Tuesday, signaling a growing feud between the two most senior Republican voices after the party lost the White House and control of the Senate.

"Mitch is a dour, sullen, and unsmiling political hack, and if Republican Senators are going to stay with him, they will not win again," Trump said in a statement just three days after McConnell excoriated him following the former president's second impeachment trial, on a charge of inciting the deadly attack on the U.S. Capitol.

Trump and McConnell parted ways in the weeks after the Nov. 3 presidential election, with Trump irked that McConnell had recognized Democrat Joe Biden as the winner in mid-December. They have not spoken since, a former White House official said.

The loss of both the White House to Biden and control of the Senate - which Democrats picked up in a pair of upset Georgia election runoff victories last month - leaves Republicans on edge as they plot how to win back congressional control in 2022.

The gap between the two men widened when McConnell declared on the Senate floor after Trump's acquittal by the chamber on Saturday that Trump was "practically and morally responsible" for the Jan. 6 Capitol attack.

McConnell nonetheless voted to acquit Trump, saying he believed the Constitution limited impeachment and conviction to current, not former officials. The House of Representatives voted to impeach Trump on Jan. 13 for inciting insurrection, but McConnell declined to reconvene the Senate ahead of its scheduled Jan. 20 session for the impeachment trial.

Trump, who delivered a fiery speech to supporters just before the Capitol assault, denies any responsibility for the violence.

"The people who stormed this building believed they were acting on the wishes and instructions of their president," McConnell said in his Senate speech, adding he was outraged by the violence and Trump's repeated false claims that his election defeat was the result of widespread election fraud.

The two are trying to push the party in opposite directions - McConnell back toward the roots of a budget-focused, pro-trade party, while Trump, who is still backed by a large portion of the Republican voter base, advocates a more populist approach.

McConnell, who normally stays out of intra-party conflict, told the Wall Street Journal in an interview published on Monday that he would consider "trying to affect the outcome of the primaries" during the 2022 congressional campaign season.

He said that he welcomed Republicans of all stripes, but "what I care about is electability."

Trump gave notice that he too would be involved in the Republican primaries. "Where necessary and appropriate, I will back primary rivals who espouse Making America Great Again and our policy of America First," he said in his statement on Tuesday.

A decade ago, when Republicans took a sharp turn to the right with the Tea Party movement, it was McConnell who pointed out that the movement's right-wing candidates may have been able to win some Republican Senate primaries but often sank in the general election.

That era saw the Democratic majority in the Senate swell to 59-41 by 2009. Republicans reclaimed the majority in 2015, in part due to McConnell's support of more moderate Republican Senate candidates.

Despite their current differences, McConnell played a major role during Trump's administration in helping pass the president's signature 2017 tax cut and in confirming three conservative justices for the U.S. Supreme Court.