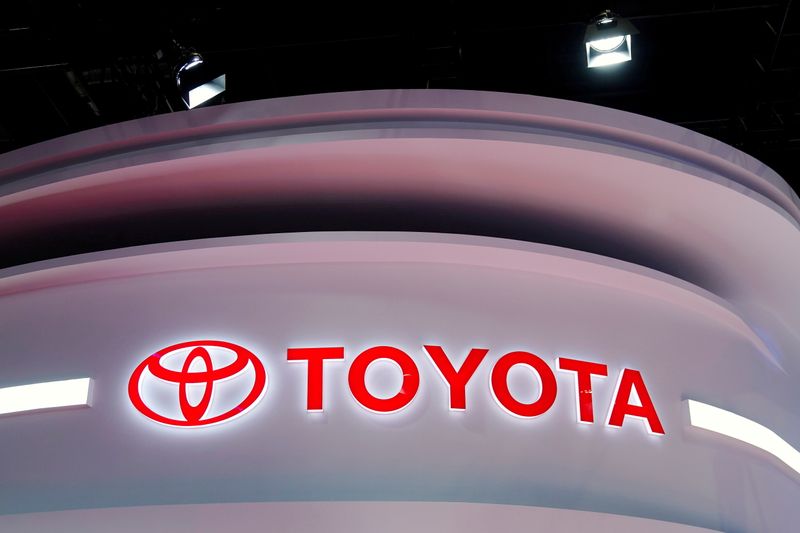 FILE PHOTO: The Toyota logo is seen at its booth during a media day for the Auto Shanghai show in Shanghai, China, April 19, 2021. REUTERS/Aly Song

By Hideyuki Sano and Fumiya Mizuno

TOKYO (Reuters) -Shares of Toyota Motor touched a record high on Tuesday as investors flocked back to automakers and other relatively cheap cyclical stocks while ditching tech companies that shone earlier in the pandemic.

"With earnings out of way, the market trend has clearly shifted in favour of value stocks from growth stocks which had been bought only based on expectations (of future growth)," said Hiroyasu Mori, strategist at Okachi Securities.

"There's no doubt that Toyota, once called an eternally cheap stock, is a leader in this." he said.

Toyota, the top Japanese company by market capitalisation and the world's biggest automaker, has weathered a global semi-conductor chip shortage better than many of its rivals and is forecasting a return to pre-pandemic profit levels this year.

"As supply chain disruptions due to the chip shortage hamper the automaker industry, Toyota has been regarded as the automaker investors can buy," Nobuhiko Kuramochi, senior strategist at Mizuho Securities, said.

Toyota's gains also reflect investors' renewed interest in traditional automakers, which have valuations below those of electric vehicle makers such as Elon Musk's Tesla.

Shares of Volkswagen have gained nearly 40% this year, while Stellantis has risen 28%.

Although Toyota has been regarded as a rare winner in an industry squeezed by competition from electric vehicle manufacturers, shares of rival Honda Motor shares also rose 3.3%, outperforming a broader market that was up about 1.5%. [.T]

"Last year, I didn't change my allocation that much. But recently I am quite busy as the shares that were doing well last year are no longer doing well."