'They want us to leave': Russian fines pile pressure on U.S. broadcaster RFE/RL 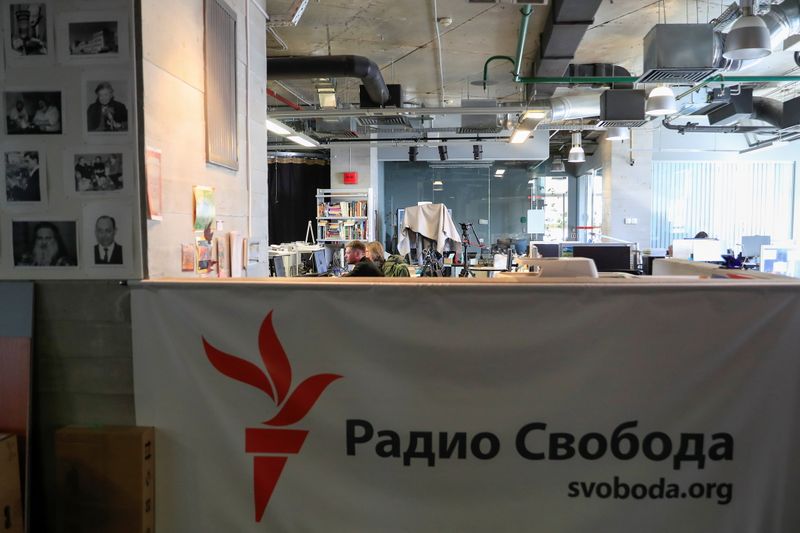 MOSCOW (Reuters) - A Russian court fined Radio Free Europe/Radio Liberty $70,000 on Wednesday for flouting its foreign agent legislation, a move the U.S. broadcaster said was part of a campaign to force it out of Russia.

The U.S. multimedia news outlet, which has a bureau in Moscow, has been fined $1 million this year for what Russia says is its repeated failure to label itself as a foreign agent in the output of its Russian services and affiliates.

The 24-word required disclaimers, introduced late last year, say the material is distributed by a media outlet "fulfilling the function of a foreign agent".

The standoff creates new friction in Washington's ties with Moscow that are already at post-Cold War lows, under pressure from an array of issues including Ukraine, Syria, sanctions and the jailing of Kremlin critic Alexei Navalny.

"The indications are that they want us to leave the country," Jamie Fly, RFE/RL's president, told Reuters, adding that from next month some staff could be held criminally liable for the unpaid fines.

"They could essentially force us into bankruptcy at that point because we have not paid the fines, because we are not complying," Fly said.

Russia's state communication watchdog says the labelling requirement is needed to make clear to a domestic Russian audience that foreign agent media "pursue the interests of other states".

RFE/RL, which is funded by a grant from U.S. Congress through the United States Agency for Global Media, says it has full editorial independence protected by U.S. law and that the labelling requirement amounts to defacing its own product.

Russia's Sputnik and RT outlets are required to register as foreign agents in the United States.

Fly said RFE/RL had complied with a similar measure in Russia, but that Moscow's demand that RFE/RL label every single piece of content went much further than that.

During the Cold War, the outlet, which was founded in the 1950s and which was initially funded via the CIA, was for years at odds with Soviet authorities. After the 1991 Soviet breakup, President Vladimir Putin's predecessor in the Kremlin, Boris Yeltsin, invited RFE/RL to open an office in Russia.

It has more than 50 full-time staff in Moscow and a network of more than 300 freelancers across the country. It also has a round-the-clock television and digital channel that is broadcast on cable or terrestrial in more than 20 countries.