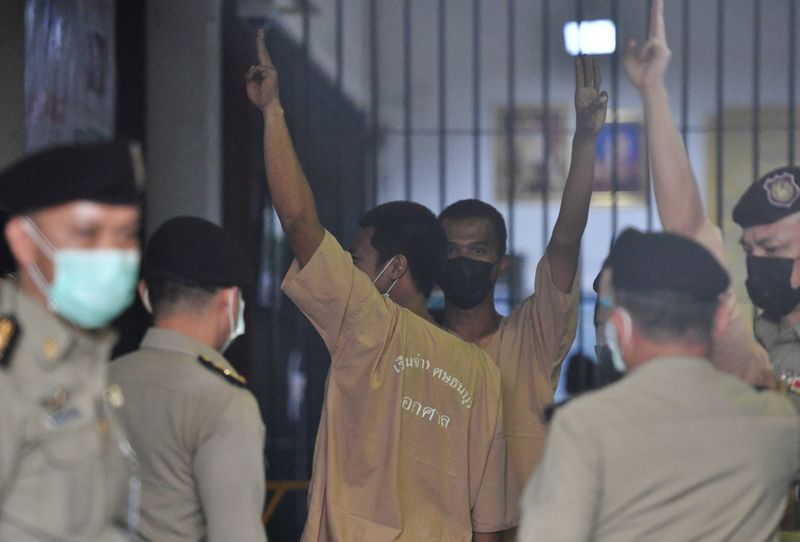 BANGKOK (Reuters) - Thailand announced a daily record in new coronavirus cases on Thursday after clusters in two jails saw nearly 3,000 inmates infected, among them a leader of anti-government protests held while awaiting trial for insulting the king.

Authorities reported 32 COVID-19 deaths and 4,887 infections, a new daily high in cases after 2,835 prisoners were added to the tally following the mass testing of thousands of inmates in two Bangkok jails.

Thailand is suffering its biggest outbreak so far, with overall cases tripling to 93,794 and deaths increasing fivefold to 518 in the past six weeks, after a year of success in containment.

So far only 1.3 million of its people have been inoculated against the coronavirus and the government has been rushing to secure 100 million doses of vaccines for use this year for a mass-inoculation campaign starting next month.

Thailand on Thursday authorised the emergency use of the vaccine of Moderna Inc, Food and Drug Administration (FDA) secretary-general Paisan Dankhum told Reuters.

It was the fourth vaccine approved following those of Sinovac, Johnson & Johnson, plus AstraZeneca, which will be manufactured locally.

Thai authorities say all of the country's residents will be eligible for free vaccination, but Bangkok health official Parnrudee Manomaipiboon on Thursday said Thai citizens would be prioritised, with the aim of registering foreigners from August.

A corrections department official said among those infected in the two jail clusters was Panupong "Mike Rayong" Jadnok, 24, who has been held since March 8 on charges that include sedition and insulting King Maha Vajiralongkorn.

He was the fourth member of the youth-led movement charged with lese majeste to test positive in jail, or within days of leaving.

Other infected protest leaders are Arnon Nampa and Chukiat "Justin" Sangwong, and Panusaya "Rung" Sithijirawattanakul, who tested positive a few days after her release on bail.

A corrections official said Panusaya may have been infected at home as inmates around her had negative tests.