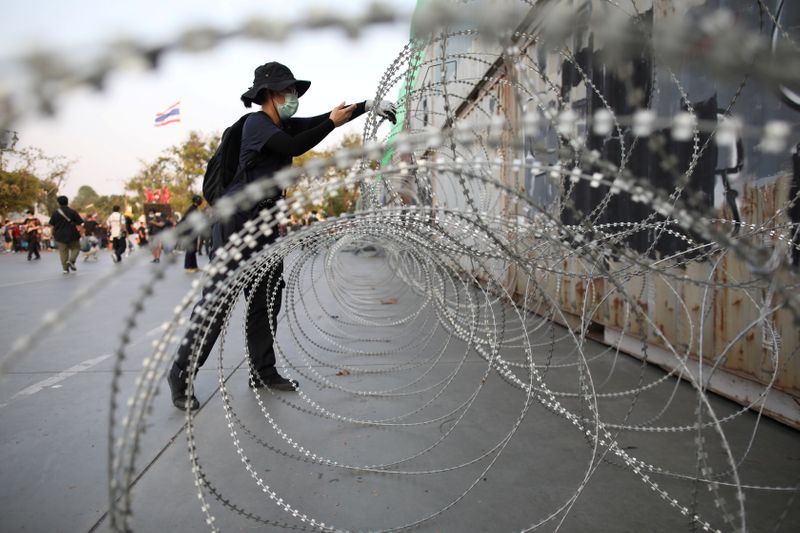 A person sets up barbed wire along containers blocking a road near the Grand Palace ahead of the anti-government protest, demanding resolutions of the government and reforms in the monarchy, in Bangkok, Thailand, March 20, 2021. REUTERS/Soe Zeya Tun

BANGKOK (Reuters) - Thai police used water cannon and charged toward protesters who had gathered near the King's Palace in Bangkok on Saturday to call for the release of protest leaders and demand reform of the monarchy.

Hundreds of police in riot gear and shields advanced on different fronts against protesters to push people away from the Grand Palace. In some places they faced off with protesters who threw firecrackers.

More than 1,000 protesters had gathered near the palace in Bangkok in an area known as Sanam Luang, or Royal Field.

"We will arrest anyone on the streets," police said over loudspeakers as multiple lines of police advanced, pushing people back.

"We repeatedly issued warnings before escalating our response," he said, adding that protesters used metal bars and threw stones and marbles.

The demonstrations comes after parliament this week failed to pass a bill to rewrite the military-backed constitution, one of the protesters' main demands.

A mass trial for protest leaders began this week against activists who were accused of sedition and insulting the monarchy.

âWeâre demanding real democracy and not a government that says it is elected but comes from the army,â said a man who gave his name only as Kung, 60. âThe world has changed and we want the same kind of monarchy as in Western countries.â

A portrait of the king near the protest area was defaced.

Thailand's youth protest movement has posed the biggest challenge so far to Prime Minster Prayuth Chan-ocha. Protesters say he engineered a process that would preserve the political status quo and keep him in power after a 2019 election. Prayuth has rejected that.

Protesters also demanded reform of the monarchy, breaking a traditional taboo, saying the constitution drafted by the military after the 2014 coup gives the king too much power.

The Royal Palace has declined to directly comment on the protests, but Prayuth and government officials have said that criticism of the king is unlawful and inappropriate.