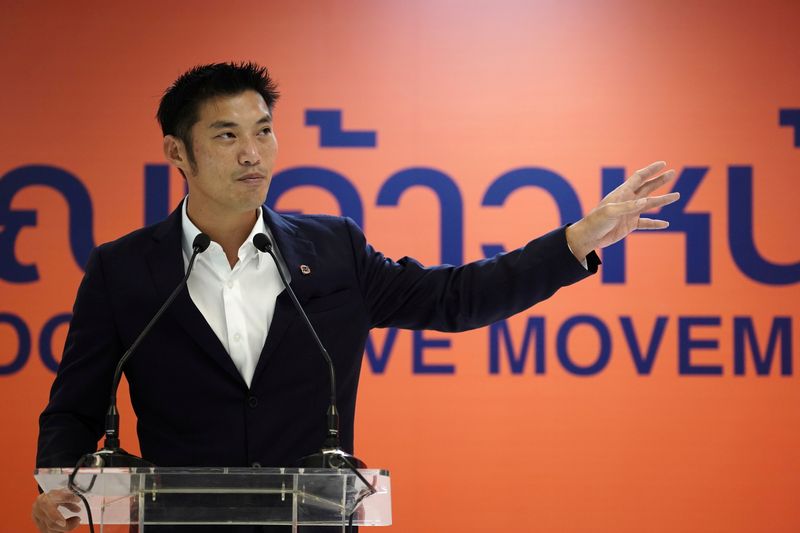 FILE PHOTO: Thailand's banned opposition politician Thanathorn Juangroongruangkit speaks during a news conference after the Digital Ministry filed a criminal complaint against him for defaming the monarchy after he criticised the country's coronavirus dis

BANGKOK (Reuters) - Thai police on Tuesday charged banned opposition politician Thanathorn Juangroongruangkit with defaming the monarchy, after he accused the government of relying too much on a royal-owned company to produce its supply of coronavirus vaccines.

Police said Thanathorn had committed lese majeste in a Facebook Live stream during which he said the government had mishandled the vaccine campaign and given an unfair advantage to Siam Bioscience, owned by King Maha Vajiralongkorn.

Thailand's top health officials have backed the government's plan, which is for Siam Bioscience to manufacture 61 million doses of AstraZeneca's COVID-19 vaccine from June, making it the main supplier for the national immunisation drive.

Siam Bioscience, which has not produced vaccines before, also received a 600 million baht ($20 million) government subsidy to develop its production capacity. It has not commented on Thanathorn's criticism.

Police will collect further evidence before filing a suit with prosecutors against Thanathorn, who on Tuesday stood by his remarks, which he said had led to a successful outcome.

"The result has been positive in prodding the government to review the vaccine policy to manage the coronavirus situation," he told reporters.

The charges come while leaders of pro-democracy protests are in jail awaiting trial for alleged royal insults.

The youth-led movement, which emerged last year to try to remove Prime Minister and former coup leader Prayuth Chan-ocha, broke a longstanding taboo by openly calling for reform of the monarchy, saying the military-drafted constitution gives the king too much power.