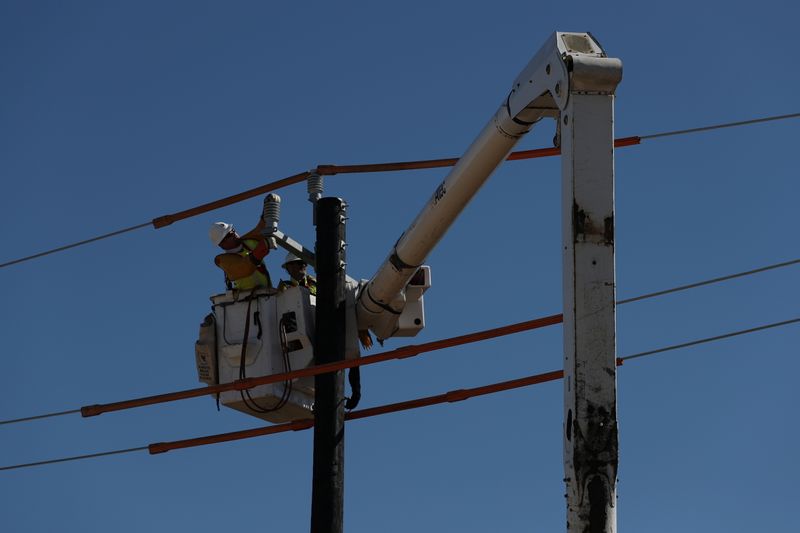 By Jennifer Hiller and Gary McWilliams

(Reuters) - Texas state lawmakers dug into the causes and cast blame on Thursday for deadly power blackouts that left millions shivering in the dark as frigid temperatures caught its grid operator and utilities ill-prepared for skyrocketing power demand.

Dual hearings in the state House and Senate are highlighting shortcomings by grid planners, electric utilities, natural gas suppliers, renewable energy and transmission operators that led to billions of dollars in damages and dozens of deaths.

One fact everyone agreed on: No one warned Texans that blackouts would last days, not hours.

"Who's at fault?" State Representative Todd Hunter demanded of utility executives. "I want to hear who's at fault. I want the public to know who screwed up."

A spokesman for the Texas Commission on Environmental Quality told Reuters that 711,938 Texans were still grappling with water supply problems by Thursday, though the number had fallen sharply.

The figure compared with Wednesday's 1.3 million, itself down from Sunday's 9 million, or about a third of the state's population.

Texas is the country's biggest producer of natural gas, but without better ties between gas producers, pipelines and power plants, the state will face future cold weather outages.

"We just couldn't get the gas at the pressures we needed," said Morgan, who told employees to buy gas at any price but could not get enough to run plants.

The Comanche Peak nuclear power plant southwest of the Dallas-Fort Worth area was minutes from going offline, Morgan said.

"My faith has been shaken" in the state's power market, Morgan added. "It didn't work in this situation and in a big way."

At one point, 40% of its gas suppliers had cut it off despite firm purchase agreements, said Calpine Chief Executive Thad Hill, which has a dozen natural gas plants in Texas.

Up to 48% of the state's power generation was offline at times last week and at least 32 people died, including an 11-year-old boy, who succumbed to hypothermia in an unheated mobile home.

"The impact of this disaster was not only financial," said State Representative Ana Hernandez, adding that some people still could not access food and water.

Six of ERCOT's 15 directors resigned this week and a nominee withdrew.

On Wednesday, Governor Greg Abbott said public anger was justified and blamed ERCOT for not acting faster to keep generators from going offline.

A quarter of about 100 retail providers in Texas are at risk of default on ERCOT's multimillion-dollar service charges. Some may sell customers to larger firms to cover costs, stifling retail competition, said Mark Foster, a lawyer and former special counsel to the state's Public Utility Commission.

"They call it the blood week," said Foster, adding that one of his clients, electricity marketer Young Energy LLC, faced a $19 million bill for services that cost $37,000 the prior month.

"There will be a significant decrease in competition for the consumer," he added.

Texas weekly power costs jumped to $50 billion from $5 billion because of higher electric and gas prices, even though more than 4 million people lost power, said Senator Nathan Johnson, who asked where the money went.

ERCOT chief executive Magness said he could not readily answer the question.

The "big missing money" is not at utilities, which paid historically high prices for natural gas on the open market when fixed supplies did not arrive, said Morgan.

"The gas business made a lot of money."