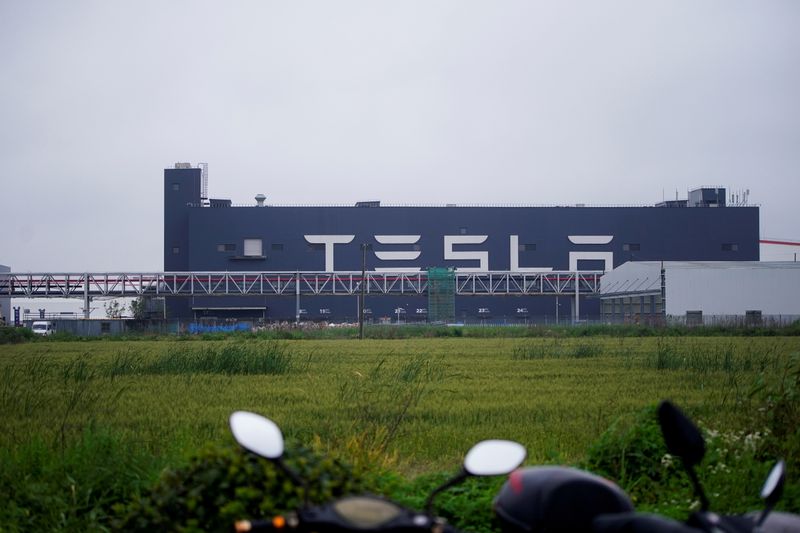 FILE PHOTO: A Tesla sign is seen at the U.S. electric vehicle maker's factory in Shanghai, China, May 13, 2021. REUTERS/Aly Song

SHANGHAI (Reuters) - Tesla said on Wednesday that a report by Chinese think tank EV100 that quoted the U.S. automaker's vice president as saying that its Shanghai factory was on track to meet its goal of making 500,000 vehicles this year was "inaccurate".

A Tesla representative told Reuters the figure was inaccurate, without elaborating further, but referred to the automaker's third-quarter results during which it said the Shanghai plant's potential annual output exceeded 450,000.

EV100 also updated its article to delete the figure without giving a reason, but retained Tao's comment on the Shanghai factory localizing more than 90% of its supply chain.

The Tesla representative confirmed the latter.

The EV100 think tank organises an annual forum where auto industry executives meet to discuss policies and the market.

In September, Reuters reported citing sources that Tesla's Shanghai factory was expected to produce 300,000 cars in the first nine months of the year, capped by a delivery rush in the end of the July-September quarter.

The factory makes the electric Model 3 sedans and Model Y sport-utility vehicles for domestic and international markets, including Germany and Japan.