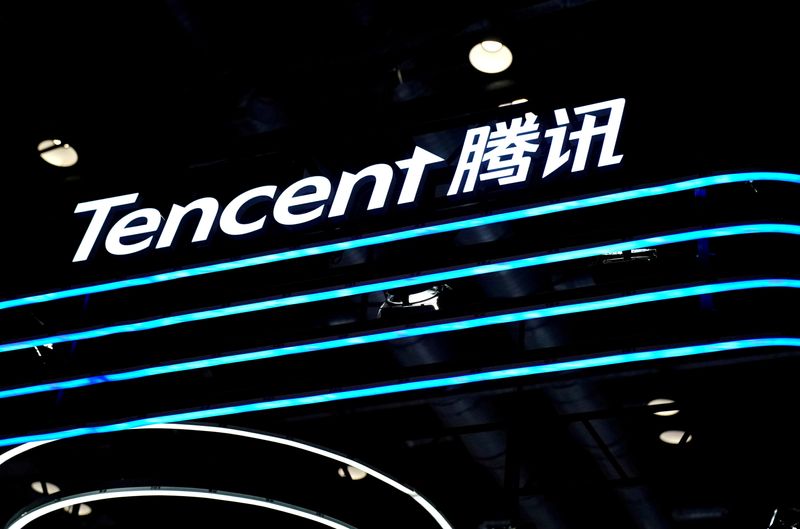 FILE PHOTO: A Tencent logo is seen at its booth at the 2020 China International Fair for Trade in Services (CIFTIS) in Beijing, China September 4, 2020. REUTERS/Tingshu Wang/File Photo

By Brenda Goh and Samuel Shen

SHANGHAI (Reuters) -China's Tencent Holdings Ltd said on Tuesday it would further curb minors' access to its flagship video game, hours after its shares were battered by a state media article that described online games as "spiritual opium".

Economic Information Daily cited Tencent's "Honor of Kings" in an article in which it said minors were addicted to online games and called for more curbs on the industry. The outlet is affiliated with China's biggest state-run news agency, Xinhua.

The broadside re-ignited investor fears about state intervention after Beijing had already targeted the property, education and technology sectors to curb cost pressures and reassert the primacy of socialism after years of runaway market growth.

"They donât believe anything is off limit and will react, sometimes overreact, to anything on state media that fits the tech crackdown narrative,â said Ether Yin, partner at Trivium, a Beijing-based consultancy.

The stock was on track to fall the most in a decade before trimming losses after the article vanished from the outlet's website and WeChat account on Tuesday afternoon. The article later reappeared later in the day with the historically loaded term "spiritual opium" removed and other sections edited. The stock ended down 6.1%.Shares of European and U.S. gaming companies also took a hit.

Activision Blizzard which has the largest exposure to Chinese markets among its U.S. peers and was due to report after the closing bell, was down 3.8%.

Electronic Arts, the company behind Sims, was down 2.8%. Take-Two Interactive Software, which gave an annual forecast late on Monday that disappointed investors, was down 7.6%.

Shares of Amsterdam-listed Prosus, which holds a 29% stake in Tencent, fell 6.9%, while European online video gaming stocks Ubisoft and Embracer Group fell about 5% and 3.7%, respectively.

In the original article, the newspaper had singled out "Honor of Kings" as the most popular online game among students who, it said, played for up to eight hours a day.

"'Spiritual opium' has grown into an industry worth hundreds of billions," the newspaper said. "No industry, no sport, can be allowed to develop in a way that will destroy a generation."

Opium is a sensitive subject in China, which ceded Hong Kong island to Britain "in perpetuity" in 1842 at the end of the First Opium War, fought over Britain's export of the drug to China where addiction became widespread.

Tencent in a statement said it will introduce more measures to reduce minors' time and money spent on games, starting with "Honor of Kings". It also called for an industry ban on gaming for children under 12 years old.

The company did not address the article in its statement, nor did it respond to a Reuters request for comment.

Outside of gaming, investors were also caught off guard by the State Administration For Market Regulation (SAMR) on Tuesday saying it would investigate auto chip distributors and punish any hoarding, collusion and price-gouging. The semiconductor stock index subsequently fell more than 6%.

The reposted Economic Information Daily article, in a shift of tone, said that authorities, game developers and families had to work together to combat child addiction to online video games, and parents had to be responsible for supervision.

Chinese regulators have since 2017 sought to limit the amount of time minors spend playing video games and companies including Tencent already have anti-addiction systems that they say cap young users' game time.

In practice, it is difficult for companies to stop children accessing games online because users can lie about their age.

That added to other regulatory action in the technology industry, including a ban on Tencent from exclusive music copyright agreements and a fine for unfair market practices.

At one point on Tuesday, Tencent was briefly de-throned as Asia's most-valuable firm by market capitalisation by chipmaker Taiwan Semiconductor Manufacturing Co Ltd.