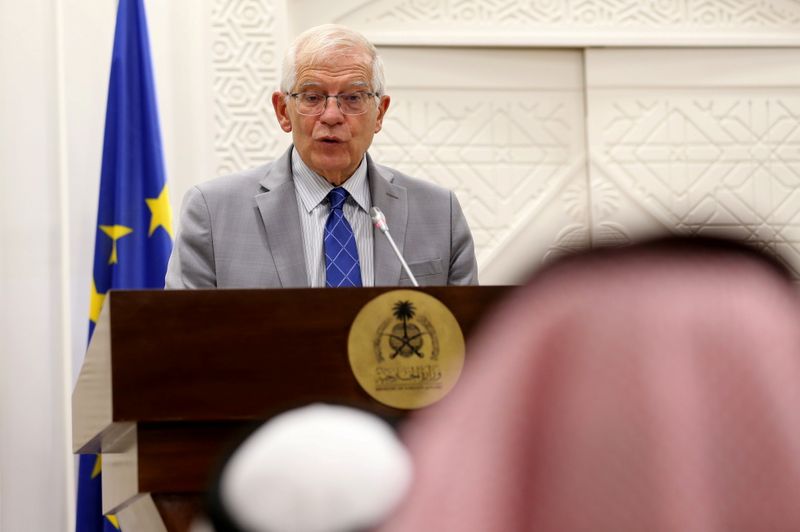 RIYADH (Reuters) - The European Union foreign policy chief said on Sunday the Taliban government's behaviour up to now was "not very encouraging", and any economic collapse in Afghanistan would raise the risk of terrorism and other threats.

Josep Borrell, speaking at a joint news conference with his Saudi Arabian counterpart, also said he hoped nuclear talks between global powers and Iran would restart in Vienna "soon".

The EU diplomat, who is in Riyadh following visits to Qatar and the United Arab Emirates, said he briefed his partners on the prospects for restarting nuclear talks and exchanged views with Saudi officials on Yemen and Afghanistan.

The EU has increased its humanitarian aid to Afghanistan since the Taliban took power, but halted development assistance - a move also taken by other countries and the World Bank.

"Certainly it's a dilemma. Because if you want to contribute to avoid the collapse of an economy, in a certain way, you can consider supporting the government ... Depending on their behaviour. And their behaviour until now is not very encouraging," Borrell said.

"If the economy collapses, then the humanitarian situation will be much worse. The tension for people to leave the country will be bigger, the threats the terrorist threat will be bigger and so the risks emanating from Afghanistan affecting the international community will be bigger," he added.

Turning to the region, he said the EU was ready to pursue trade deals with Gulf countries, saying the bloc supported Saudi Arabia's modernisation drive.

Brussels was also engaging on human rights and voiced hope the dialogue would produce "real results", he added.

Saudi Arabia's social and economic reform drive has been accompanied by a crackdown on dissent, which drew intense international scrutiny following the 2018 murder of Saudi journalist Jamal Khashoggi at the kingdom's Istanbul consulate.

Riyadh has also faced criticism over Yemen, where it leads a military coalition that has been battling the Iran-aligned Houthi movement for over six years.

Describing Yemen as a "terrible tragedy", Borrell voiced support for a peaceful settlement of the conflict, largely seen in the region as a proxy war between Saudi Arabia and Iran.