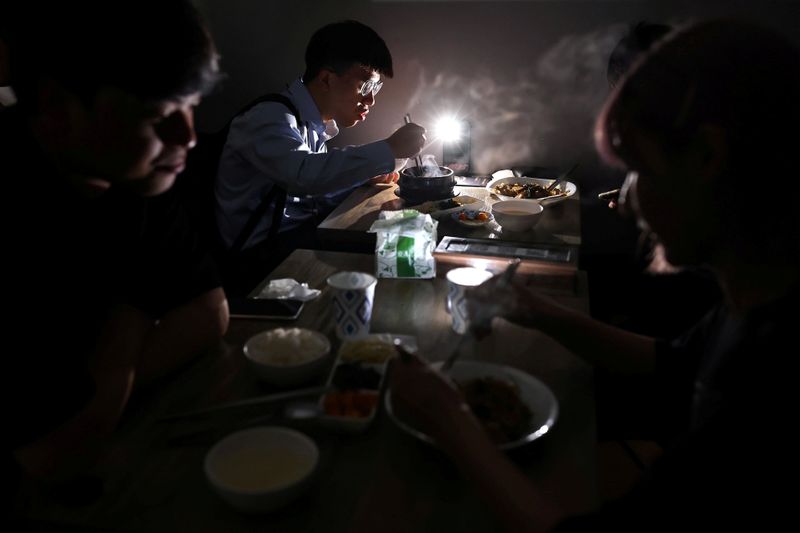 FILE PHOTO: People eat using the light from their phone while experiencing a blackout due to an outage at a power plant, in Taipei, Taiwan, May 13, 2021. REUTER/Ann Wang

Taiwan, which hosts major chip makers such as Taiwan Semiconductor Manufacturing Co Ltd, imposed power cuts on Monday evening following a spike in demand amid a heatwave and drought and failure at a power plant, in the second such outage in a week.

In a live broadcast online, Tsai offered her apology for the two outages and promised to reexamine the island's power management amid heated debate over the her electricity policy.

"Two such incidents in one week is not only hard for citizens to accept, it is also hard for me to accept," Tsai said, adding extreme weather and a booming economy had posed a "great challenge" to electricity management.

Tsai said she had instructed the economy ministry and state-run electricity provider Taipower to reexamine their management planning. She did not elaborate.

Taiwan's economy grew 8.16% in the first quarter, its fastest in more than a decade, as the "work from home" boom because of the novel coronavirus pandemic sparked strong global demand for the island's hi-tech exports.

The boom, which saw chip firms as well as petrochemicals expanding production, comes as Taiwan is grappling with its worst drought in more than half a century.

Taipower said on Monday the drought meant electricity generated by hydropower plants was insufficient to meet the unexpected demand during a heatwave on Monday, a record high for May.

Taiwan's main opposition party, the Kuomintang, has said the outages showed the government's power policy was inadequate and called for Economy Minister Wang Mei-hua to step down.

Tsai's government wants to phase out nuclear power and has set a target to generate 20% of the island's electricity from renewables by 2025, up from just 5.4% last year.