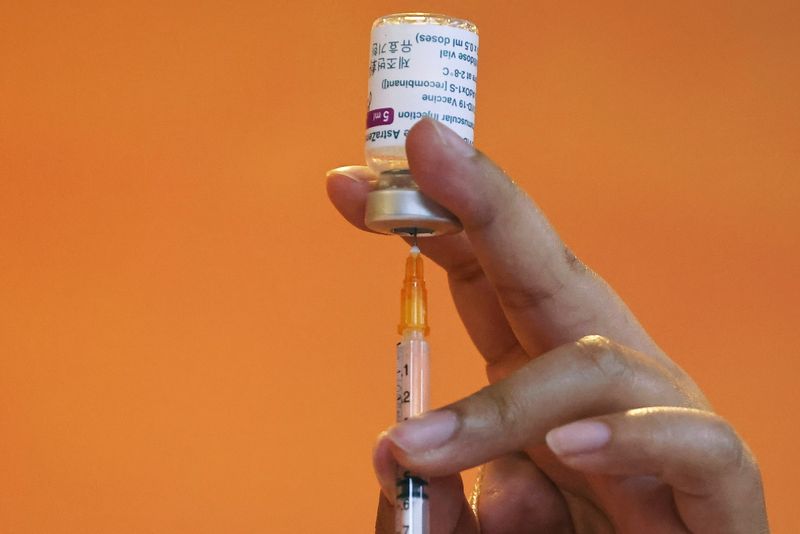 FILE PHOTO: A nurse prepares a dose of the AstraZeneca vaccine against the coronavirus disease (COVID-19) during an organised media visit to the vaccination at Taoyuan Hospital in Taoyuan, Taiwan April 12, 2021. REUTERS/Ann Wang

TAIPEI (Reuters) -Taiwan is mobilising its diplomatic corps to secure a speedier delivery of COVID-19 vaccines - a quest that has become more urgent since a sudden rise in domestic cases on an island that has vaccinated less than 1% of its population.

Taiwan has reported more than 700 new domestic infections during the past week, leading to new curbs in the capital, Taipei, and shocking a population that had become accustomed to life carrying on almost normally with the pandemic well under control.

Taiwan, a major semiconductor manufacturing hub, has only received about 300,000 shots so far for its more than 23 million people, all AstraZeneca Plc vaccines, and those are rapidly running out.

In comments published on Tuesday by Taiwan's official Central News Agency, Taipei's top official in Washington said she was in talks with the United States for a share of the COVID-19 vaccine doses President Joe Biden plans to send abroad.

"We are in negotiations and striving for it," said Hsiao Bi-khim, the de facto Taiwanese ambassador to the United States.

She said that although vaccine purchases were the remit of Taiwan's health ministry, her office's role was to talk to the United States about speeding up those requests.

Biden said the United States would send at least 20 million more vaccine doses abroad by the end of June.

A source briefed on the situation told Reuters the U.S. government had already been helping Taiwan coordinate with manufacturers to speed up deliveries.

The United States, like most countries, has no formal diplomatic relations with Chinese-claimed Taiwan, but is its most important international backer.

Taiwan President Tsai Ing-wen, speaking on Tuesday, said they hoped to provide domestically-developed vaccines before the end of July, and that more imported ones were on the way.

"Vaccines that we purchased through various channels will gradually arrive from overseas. Everyone, please don't be worried," she said.

Taiwan has ordered 20 million doses, mostly from AstraZeneca but also from Moderna Inc, though global shortages have curtailed supplies.

Taiwan has said it also expected to get more than 1 million AstraZeneca shots via the COVAX vaccine-sharing programme for lower-income countries.

A second source familiar with the matter said Taiwan's diplomats in Germany had been involved in talks with BioNTech SE.

Taiwan complained in February the firm had pulled out of a deal to sell it 5 million doses at the last minute, possibly because of Chinese pressure. BioNTech later said it did plan to provide COVID-19 vaccines to Taiwan.

BioNTech declined to comment on the status of the talks.

"We are making great efforts and trying through all means to get the qualified vaccines for our people and residents," she said.