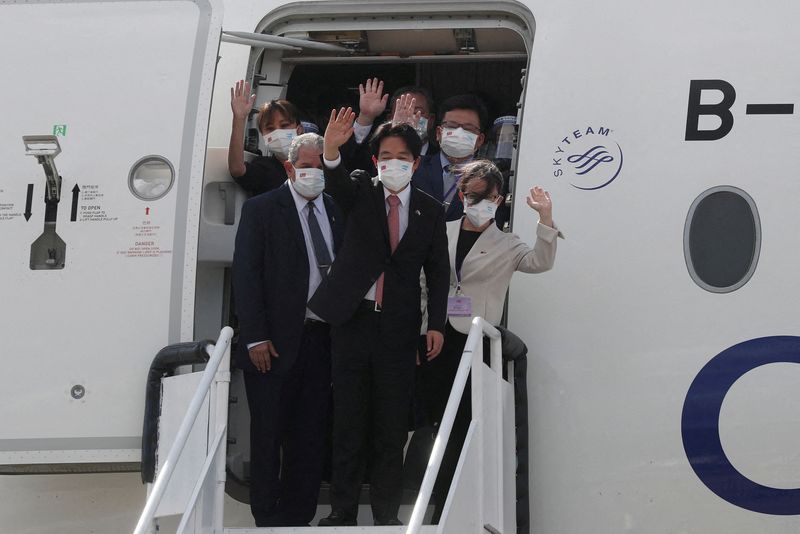 TAIPEI (Reuters) -Taiwan Vice President William Lai wrapped up his visit to the United States and Honduras with a virtual meeting with U.S. House of Representatives Speaker Nancy Pelosi, in a further show of support from Washington for the Chinese-claimed island.

Lai went to Honduras this week for the inauguration of its president, seeking to shore up shaky ties with one of Taiwan's last remaining diplomatic allies.

Only 14 countries maintain official ties with Taiwan, viewed by Beijing as Chinese territory with no right to the trappings of a state.

Stopping off in San Francisco on Friday on his way back to Taiwan, Lai said he had spoken virtually with Pelosi, one of the ruling Democratic Party's most high-profile politicians.

"I was pleased to meet with @SpeakerPelosi, a champion of human rights and true friend to Taiwan. We are committed to working together to strengthen the U.S.-Taiwan partnership," Lai tweeted, sharing a picture of the video call, also attended by the de facto Taiwanese ambassador in Washington, Hsiao Bi-khim.

Lai briefly talked with U.S. Vice President Kamala Harris in Honduras on Thursday https://www.reuters.com/world/us-taiwanese-vice-presidents-speak-rare-encounter-honduras-2022-01-28, a rare encounter that was highly symbolic and provoked anger in Beijing at a time of simmering tension with Washington.

The United States has no formal relations with Taiwan, but is its most important international backer and arms supplier.

China's foreign ministry spokesman Zhao Lijian said in a statement on Sunday that China firmly opposes any form of official exchange between the United States and Taiwan, and has lodged a "solemn representation" with the United States over Lai's virtual meetings with U.S. lawmakers.

"We urge the U.S. to abide by the one-China principle and the stipulations in the three China-U.S. joint communiquÃ©s, immediately stop the erroneous acts of having official exchanges with Taiwan, avoid sending any wrong signal to the 'Taiwan independence' separatist forces, and refrain from further undermining China-U.S. relations and peace and stability across the Taiwan Strait."

Transiting Los Angeles on his way to Honduras, Lai also spoke virtually with over a dozen members of the U.S. Congress.

Lai is a potential contender to be president in Taiwan's next election in 2024.

Taiwan has been heartened by the continued U.S. support offered by the Biden administration, which has repeatedly talked of its "rock-solid" commitment to the democratically governed island.

China and the United States could end up in a military conflict if the United States encourages Taiwan's independence, Beijing's ambassador https://www.reuters.com/world/china/support-taiwan-independence-could-spark-us-military-conflict-with-china-chinese-2022-01-28 to Washington said in a U.S. radio interview broadcast on Friday.

(Reporting by Ben Blanchard in Taipei, additional reporting by Emily Chow in Beijing; Editing by Stephen Coates and Barbara Lewis)