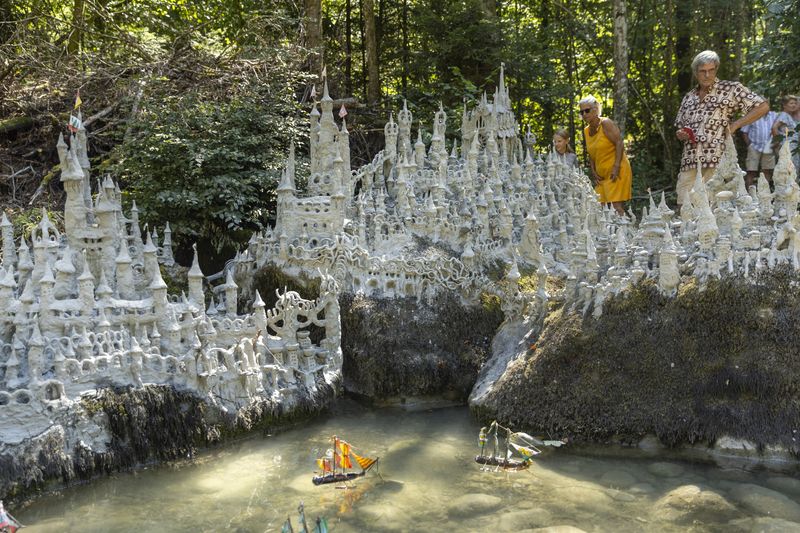 Visitors look at the work called "Monthoux castle" by land art artist Francois Monthoux, which he made out of clay retrieved from the dried bed of Le Toleure river due to ongoing drought, in Saubraz, Switzerland, August 12, 2022. REUTERS/Denis Balibouse

SAUBRAZ, Switzerland (Reuters) - Swiss artist Francois Monthoux's annual project to build clay sculptures on the banks of Switzerland's Toleure river has sprawled into a captivating castle complex this year as the drought afflicting Europe allows him to extend his dream world.

Monthoux began this year's project with modest ambitions six weeks ago but the drought allowed him to build an entire city of spires.

Now he has mixed feelings: he wants it to rain, but is sad at the thought of his dream world disappearing when it does.

"I imagine the life of the people walking under the arches, under the bridge, looking at the monuments, looking at the city," said Monthoux, who works with clay from the dried bed of the Toleure river in the Vaud canton in western Switzerland.

"So, I enter a bubble, and I become a dreamer ... I see their world being created under my fingers," he added.

Monthoux, a nature lover, says he is sad to see plants dying all around him and "it would be a catastrophe" if an enduring drought meant he could keep going with the project for years. At the same time, he knew from the outset it was temporary.

"Of course, I'm a little bit sad, because I'm sad that the form I gave to the matter will disappear," he said.

Visitors to the sculpture are enjoying it while it lasts.

"I don't have words to say what I feel, because it's ... it's just sublime," said Heidi Butty, a Vaud resident.