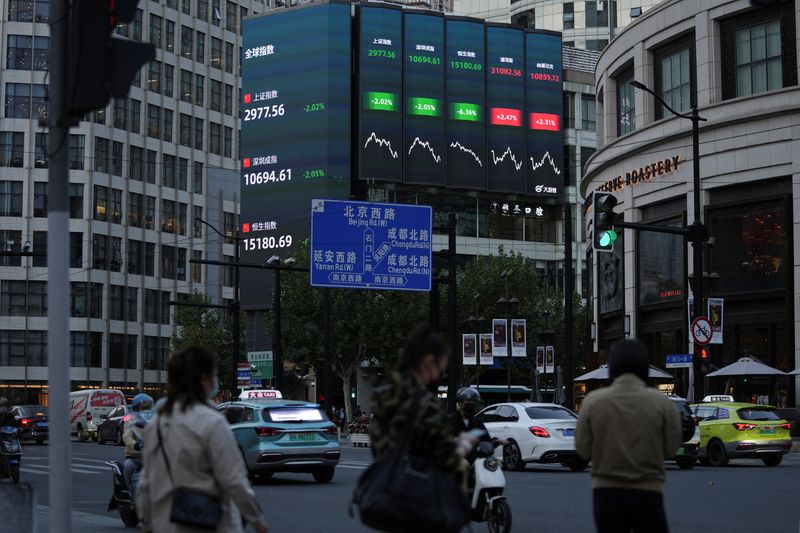 By Herbert Lash and Danilo Masoni

But benchmark U.S. yields and the dollar both fell, suggesting lower rates ahead.

"Slower rate hikes have been the trend globally of late, but the Fed remains a wild card. Overall, it's a fickle, anxious market ahead of next week's Fed meeting," said Joe Manimbo, senior market analyst at Convera in Washington.

The S&P 500 and Nasdaq fell, adding to the prior day's sell-off on warnings by three major U.S. banks of a looming recession. Questions about how sticky inflation might be have raised uncertainty about the Fed's policy path as the pace of future inflation remains unknown.

"Looking back in previous decades of high levels of inflation, it usually takes a few years for inflation to moderate," said Chris Dyer, director of global equity at Eaton Vance in London.

MSCI's gauge of stocks across the globe fell 0.42%, while the broad European STOXX 600 index closed down 0.62% to mark its fourth straight decline as fears of a global recession intensified.

On Wall Street, the Dow Jones Industrial Average closed flat, while the S&P 500 lost 0.19% and the Nasdaq Composite dropped 0.51%.

Many in the market believe inflation is moderating and bond yields have peaked, allowing central banks to begin slowing rate hikes when policy-makers from the Fed, Bank of England and European Central Bank meet next week.

The Bank of Canada signaled on Wednesday that its historic tightening campaign was near an end as it raised benchmark overnight interest rates by 50 basis points to 4.25%, the highest level in almost 15 years.

Earlier, the Reserve Bank of India slowed the pace of rate increases with a 35 basis point hike of its key lending rate to 6.25%, but warned inflation could remain pervasive and elevated.

Fed Chair Jerome Powell also has warned the fight against inflation is far from over, but late last month he said the Fed could ease the pace of its rate hikes as soon as December.

Powell's comments have led the market to price in a lower peak interest rate, which Fed funds futures showed on Wednesday to be 4.918% next May, down from recent highs above 5.1%. Futures show the terminal rate at 4.419% in December 2023.

The yield on benchmark 10-year Treasury notes fell 9.2 basis points to an almost three-month low of 3.421%. But the inversion of two- and 10-year note yields, a recession harbinger, deepened at -84.5 basis points.

Gold prices rose, helped by a retreat in the dollar and Treasury yields, as investors anticipate the projection of slower rate hikes at the Fed's meeting on Dec. 13-14.

The dollar slipped as traders weighed up an uncertain economic outlook, while China's yuan firmed as authorities loosened some of the country's zero-COVID rules.

China's national health authority said asymptomatic COVID-19 cases and those with mild symptoms can self-treat while in quarantine at home, the strongest sign so far that Beijing is preparing to live with the disease.

Market reaction was negative as the focus shifts to how well China can execute its policy shift.

"It is difficult to assume that China's reopening will not be inflationary when the opposite was true for the rest of the world and that will be the challenge heading into 2022," said Geoff Yu, strategist at BNY Mellon.

Oil slid to its lowest since the start of the year in volatile trading after U.S. government data showed an unexpectedly large build in fuel stocks, feeding fears about demand in a market already spooked by an uncertain economy.