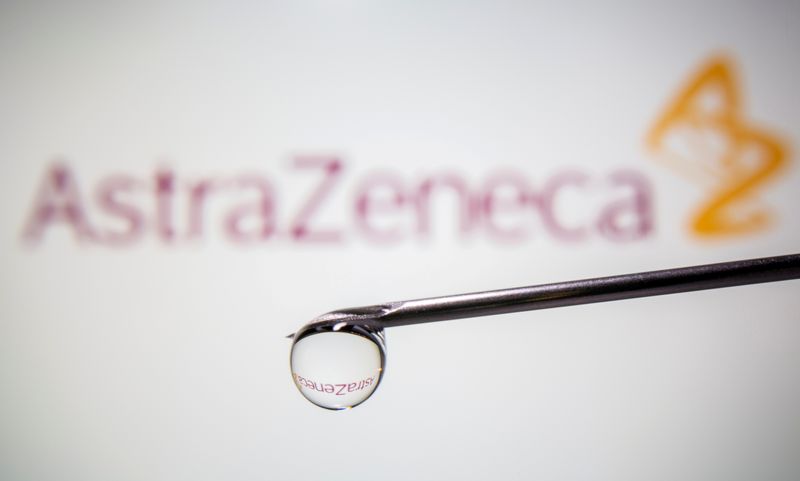 FILE PHOTO: AstraZeneca's logo is reflected in a drop on a syringe needle in this illustration taken November 9, 2020. REUTERS/Dado Ruvic/Illustration

By Alexander Winning and Wendell Roelf

The country paused the rollout of AstraZeneca doses this month, after preliminary trial data showed they offered minimal protection against mild to moderate illness from the country's dominant coronavirus variant.

It has been consulting with scientists about what to do with the AstraZeneca vaccine, switching to a plan to start inoculating healthcare workers with J&J's alternative in a research study. The South African Medical Association (SAMA) said if the first shots arrived on Tuesday as expected, then vaccinations could start on Wednesday.

Eighty thousand J&J shots are expected initially, and up to 500,000 health workers could be immunised in total in the study.

SAMA chairwoman Angelique Coetzee said vaccinations would happen at hospitals in each of the country's nine provinces. Roughly two-thirds of the doses would go to public-sector health workers, and one-third to those in the private sector.

Anban Pillay, deputy director-general at the Department of Health, said South Africa planned to share the 1 million AstraZeneca doses it received at the start of the month from the Serum Institute of India via the African Union (AU).

"The doses are going to be shared with countries on the continent ... via the AU," Pillay told Reuters, adding that the government would look to recover money spent on the AstraZeneca vaccine but was still finalising how to do that.

He said it was not true that South Africa had asked the Serum Institute to take back the doses, as reported by Indian newspaper The Economic Times.

Health Minister Zweli Mkhize said some African countries had already expressed an interest in acquiring South Africa's AstraZeneca doses. He said vaccinations were due to begin this week and that President Cyril Ramaphosa would announce the date and time of the first shot.

"I can also say that we have actually secured enough doses to vaccinate all the people who will need to be vaccinated in South Africa," Mkhize told lawmakers, without saying how he arrived at that calculation.

The government had initially planned to vaccinate 40 million people, or two-thirds of the population, to achieve some level of herd immunity, but it is not clear whether that target still stands.

The AU's disease control body said last week it was not "walking away" from AstraZeneca's vaccine but would target its use in countries that have not reported cases of the more contagious 501Y.V2 variant first identified in South Africa late last year.

The AU said six countries other than South Africa had confirmed the variant was circulating, but there are concerns it has spread elsewhere.

AstraZeneca says it believes its two-dose vaccine protects against severe COVID-19 and that it has started adapting it to be more effective against the 501Y.V2 variant.

J&J's vaccine is administered in a single shot, an advantage given how complex a logistical exercise the mass vaccination campaign will be.

The health ministry said on Tuesday that the manufacturers of Russia's Sputnik V vaccine had submitted documentation to local medicines regulator SAHPRA for registration.

It added that scientists were conducting analyses on Sputnik V, following concerns about the effects of its Ad5 component on communities with a high prevalence of HIV.

South Africa has one of the highest HIV burdens globally.

SAHPRA did not immediately respond to a request for comment.