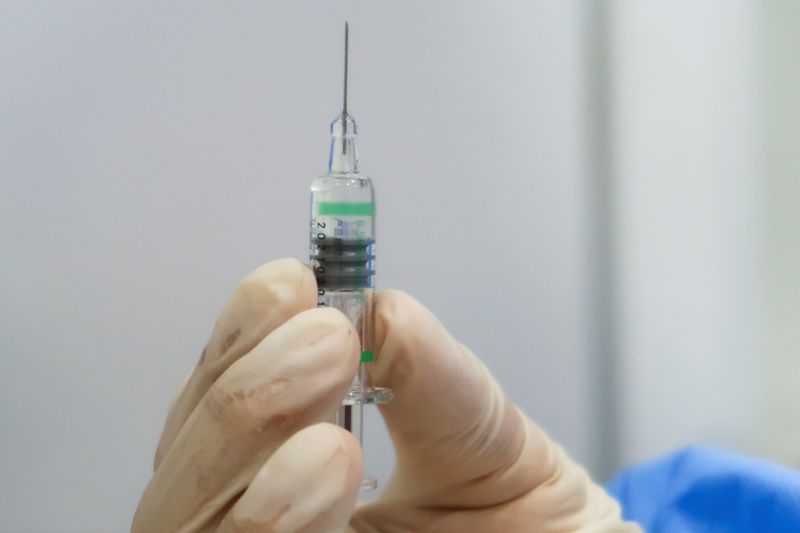 FILE PHOTO: A nurse holds a syringe containing a coronavirus disease (COVID-19) vaccine made by the Beijing Institute of Biological Products, a unit of Sinopharm subsidiary China National Biotec Group (CNBG), at a vaccination center during a government-or

BEIJING (Reuters) -Residents of some parts of China that are grappling with tight supplies of coronavirus vaccines have not received their second doses in time, but the crunch will ease by June as production is being stepped up, a health official told state media.

The pace of China's massive inoculation campaign has slowed, to a daily average of about 3.3 million doses in the seven days until Monday, down from the corresponding figure of 4.2 million in the week until April 12, Reuters calculations showed.

"At present, domestic vaccine supply is relatively tight, but from May, especially after June, the situation will ease significantly," Zheng Zhongwei, the director of a team coordinating vaccine development projects, told the Global Times in an interview.

Zheng did not say how severe the crunch was or which areas experienced tightness. The Global Times, published by the official newspaper of the ruling Communist Party, did not say how long people in those areas had to wait for the second shot.

By Wednesday, China had given more than 200 million doses of vaccines, ranking only behind the United States, and it aims to inoculate 40% of its population by summer.

Big cities such as Beijing and Shanghai have widened vaccination efforts to include foreigners, with the pace in some cities outstripping the national average, as China prioritises supplies to key provinces.

The capital city of Beijing, for example, has inoculated more than half of its population of 21.5 million.

This month Zheng said China was likely to have produced 3 billion doses of the vaccines by year-end, allowing it to meet the demand in the second half of 2021.

China's national guidelines allow intervals of up to eight weeks between the two doses of vaccines developed by domestic firms Sinopharm and Sinovac Biotech.

Local authorities should make sure the second dose can be administered within eight weeks, said Mi Feng, a spokesman of the National Health Commission.

"Avoid the situation where there's no dose following the first one," he told a news conference on Wednesday.