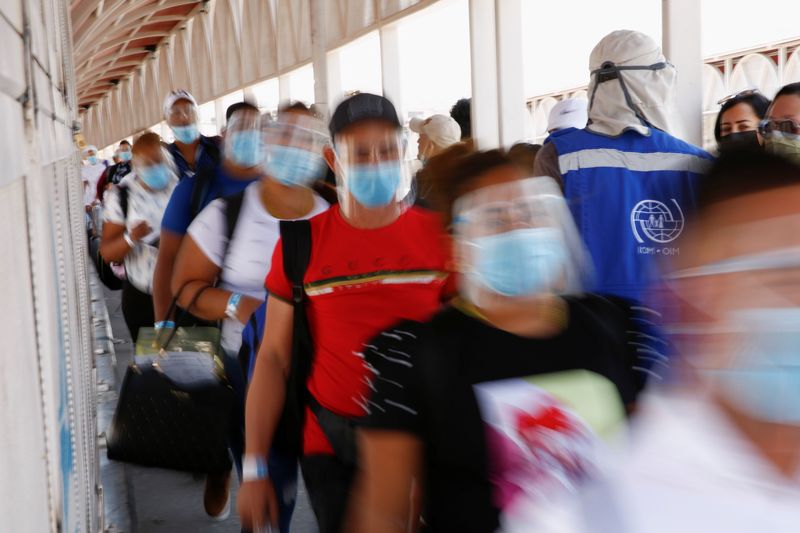 Asylum seekers, under the Migrant Protection Protocols (MPP) program, walk across the Paso del Norte international border bridge from the Mexican side to continue their asylum request in the United States, in Ciudad Juarez, Mexico June 18, 2021. Picture t

CIUDAD JUAREZ (Reuters) - There was one word that rolled off migrant Andy Molina's tongue as he spoke about plans to soon reunite with his wife and son in the United States after two years of separation: "happy."

The 27-year-old from Honduras and his 10-year-old daughter Eleana Victoria spent more than a year in Mexico while waiting to be able to apply for asylum in the United States, held back by a Trump-era program that forced asylum seekers to wait in Mexico for court cases.

Molina said he was driven to leave Honduras out of concern for his children. Although he has a university degree, he said the only job he could find was working at a store where he was forced to pay a so-called "war tax" to gangs, who threatened to kill him if he did not comply.

"You don't want that future for your kids," he said in an interview on Friday shortly before entering Texas from the northern Mexico city of Ciudad Juarez.

He and his daughter walked across the international bridge hand-in-hand, part of a group of 74 people allowed into the United States to pursue asylum applications on the same weekend as World Refugee Day, created by the United Nations to honor the courage of people forced to flee their homes.

During the wait in Mexico, Molina rented a small apartment in southern Mexico and found odd jobs to provide for himself and his daughter. The months stretched out under the Migrant Protection Protocols (MPP) that former President Donald Trump enacted to make asylum-seekers wait out their proceedings in Mexico, often in the dangerous northern border cities.

President Joe Biden began rolling back the policy upon taking office, and nearly 95% of the thousands of MPP asylum-seekers gathered in Mexico have been able to enter the United States to pursue their cases.

Molina, so close to rejoining his family after the long separation, chose to focus on the positive.