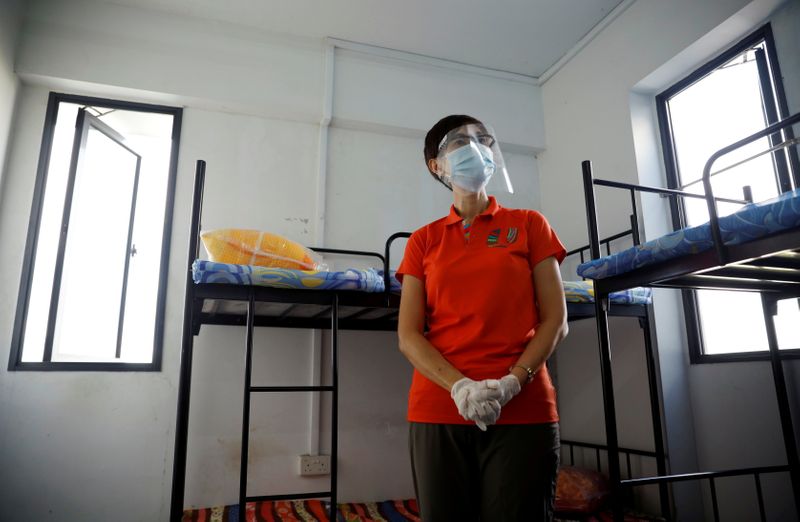 FILE PHOTO: Singapore's Minister of Manpower Josephine Teo tours a dormitory room for migrant workers who have recovered from the coronavirus disease (COVID-19), amid the outbreak in Singapore May 15, 2020. REUTERS/Edgar Su

By Chen Lin and Aradhana Aravindan

SINGAPORE (Reuters) - Singapore said on Thursday it is quarantining about 1,200 migrant workers after finding COVID-19 cases in their dormitory including among men who had recovered from the virus, raising concerns about re-infections.

Authorities are conducting COVID-19 tests for all residents of Westlite Woodlands dormitory after one worker was found positive on Tuesday during routine testing. The worker had received a second vaccination dose a week earlier and his roommate also tested positive.

So far, ongoing testing in the dormitory shows 17 recovered workers are positive for COVID-19.

Authorities and experts are investigating the cases for possible re-infection or whether they are persistent shedders from their earlier infection, the health ministry said.

The bulk of Singapore's more than 60,000 COVID-19 cases occurred in dormitories that house tens of thousands of mainly South Asian low-wage labourers, triggering lockdowns of the complexes last year.

Singapore is also blocking entry to long-term visa holders and visitors with recent travel history to India, which is battling a second wave of COVID-19 infections and from where many labourers arrive.

"Even though these workers would have served the stay home notice before they start work, there is still a risk that a leak may happen, and cause another wave of infection in the dormitories," the health ministry said.

It added, however, there was no evidence that the recent dormitory cases were linked to a new strain from India.

Singapore is also increasing quarantine requirements for migrant workers who arrive newly from high-risk countries and is tightening testing measures.

While Singapore is prioritising vaccinating those workers who have not yet been infected, it also plans to inoculate recovered workers with a single dose, government officials said.

Singapore has largely brought the virus under control locally and has also been rolling out vaccinations. It last reported more than 10 cases in a single day among dormitory residents in September, with barely any new infections over the last few months.

The health ministry has previously said vaccines were effective in preventing symptomatic disease but further research was required on whether they also prevented onward transmission.

Concerns have been growing over new variants of the virus and the effectiveness of existing vaccines against them.

While the potential for re-infection has existed, these cases came sooner than expected, said Hsu Li Yang, an infectious diseases expert at the National University of Singapore.

The dormitory workers are still mostly separated from the rest of the population, typically only allowed out of their residence for work.

Meanwhile, Singapore's transport ministry said it hoped a long-delayed air travel bubble with Hong Kong would start soon, but no date had been fixed yet.