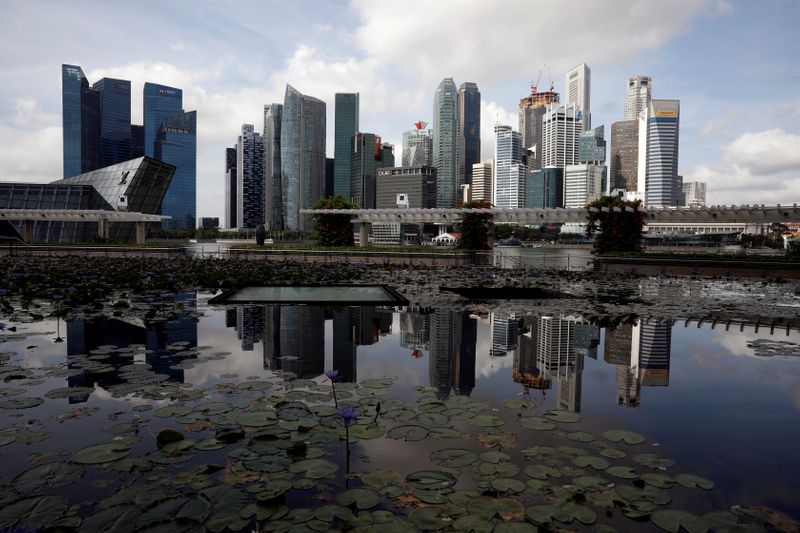 By Chen Lin and Aradhana Aravindan

SINGAPORE (Reuters) - Singapore's economy contracted less than initially estimated in the fourth quarter, putting the country on a path to a gradual recovery in 2021 after it marked its worst ever recession last year due to the COVID-19 pandemic.

Gross domestic product (GDP) fell 2.4% year-on-year in the quarter, the ministry of trade and industry said on Monday, versus the 3.8% drop seen in the government's advance estimate. Analysts had expected a contraction of 3.5%, according to a Reuters poll.

"The Singapore economy is projected to see a gradual recovery in 2021, with GDP not expected to return to pre-COVID levels until the second half of the year," said Gabriel Lim, the ministry's permanent secretary.

The government expects GDP to grow 4% to 6% this year. The economy shrank 5.4% in 2020, marking its worst ever recession, compared with the advance estimate of 5.8%.

The government said outward-oriented sectors are likely to benefit from a pickup in global economic activity, but activity levels in sectors related to tourism and aviation are projected to remain below pre-pandemic levels even by the end of 2021.

"The outlook ahead stays uneven, although we are optimistic overall," said Jeff Ng, senior treasury strategist at HL Bank. "Barring another round of downside risks materialising, we see some possibilities of Singapore even outperforming our 2021 GDP forecast of 6.3%."

Singapore, a travel and transport hub, has brought its COVID-19 situation under control with few new local cases and it has begun its vaccination programme. However, the pace of border re-opening has slowed due to the global surge in cases and the emergence of more contagious strains of the virus.

"For the broader economy and macro economy level, I think a large part of our recovery is still going to be somewhat linked to what's going on in the rest of the world rather than domestically," Lim said, citing the city-state's open and trade-reliant economy.

On a quarter-on-quarter seasonally-adjusted basis, the economy expanded by 3.8% in the fourth quarter.

The data comes a day ahead of the city-state's budget announcement. Economists expect an expansionary but trimmed down budget to support businesses still struggling from the impact of the coronavirus.

The central bank left monetary policy unchanged at its last meeting in October and said its accommodative stance would remain appropriate for some time.