Science says it's safe, but some in France don't trust AstraZeneca vaccine 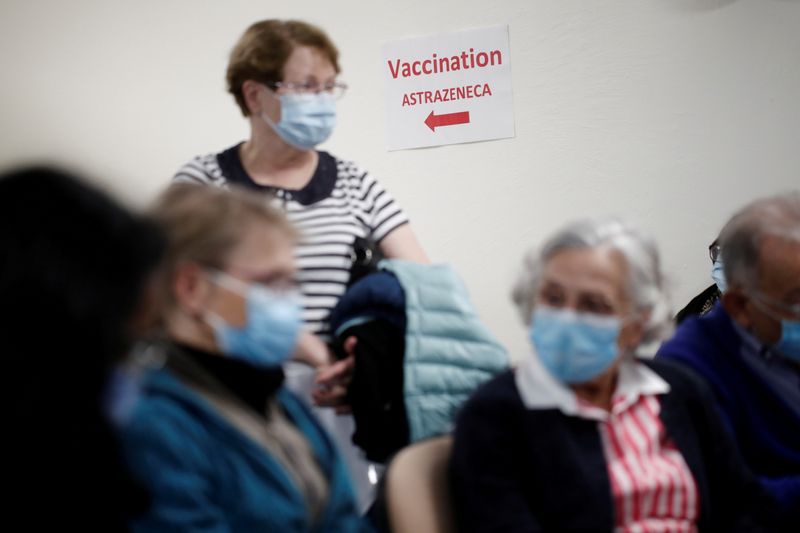 By Caroline Pailliez and Lea Guedj

PARIS (Reuters) - A 60-year-old recovering from breast cancer, Paris resident Nadine Roger is at high-risk from COVID-19 and wants to get vaccinated as soon as possible. Yet when she was offered the vaccine manufactured by AstraZeneca she turned it down.

"The AstraZeneca (shot) frightens me," she said. Roger, a medical technician, said she would wait instead for the shot made by U.S. firm Johnson & Johnson, which has not yet been approved by European regulators.

According to the most recent data made available by the French health ministry, for the end of February, France was using 24% of its AstraZeneca doses, compared with 82% for vaccines made by Pfizer/BioNTech and 37% for the Moderna shot.

That is partly due to logistical bottlenecks, but also because some French people don't trust the AstraZeneca shot - despite multiple scientific studies that indicate it is safe and effective - according to interviews Reuters conducted with eight people involved in France's vaccine rollout.

They said some of those offered the vaccine were worried about side-effects, sceptical it was effective against new variants of COVID-19, and confused by shifting evidence on how well it works for older people.

The AstraZeneca vaccine had a bumpy genesis.

European regulators recommended it not be used for people over 65, citing a lack of data. French President Emmanuel Macron was quoted as saying the shot was "quasi-ineffective" and the French regulator called on hospitals to stagger inoculations of their staff after side effects led frontline workers to call in sick.

"All that sent out the wrong signal to health workers, but also the rest of the population," said Jacques Battistoni, head of the largest general practitioners' union in France.

To be sure, France is one of the most vaccine-sceptic countries globally, though surveys have showed the proportion of the public intending to get inoculated increasing.

Like other wealthy countries, France has made the AstraZeneca shot a pillar of its vaccine rollout. With all the big vaccine makers experiencing production problems, countries cannot afford for people to snub one of the shots.

A health ministry official and two doctors involved in the rollout said the uptake was accelerating as logistics improve and people get used to the AstraZeneca shot.

AstraZenaca doses were initially to be delivered to hospitals and vaccination centres for the inoculation of healthcare workers, and to general practitioners for the vaccination of 50- to 64-year-olds with pre-existing conditions.

In the first week of the AstraZenaca rollout, which coincided with the start of school holidays, GPs ordered fewer than half of their allocated doses.

The president of AstraZeneca France, Olivier Nataf, told the weekly Journal du Dimanche at the weekend that his company's vaccine was entirely effective against severe COVID-19 infections and 80% effective in preventing hospitalizations.

"Confusions and disappointments can arise. Many are already resolved," he told the newspaper. "There may be others. But the enemy remains the pandemic. Any controversy diminishes our ability to overcome it."

European regulators have concluded the side-effects cause by the AstraZenaca vaccine are not a cause to doubt its safety. A study in Scotland covering 5.4 million people showed it, and the Pfizer vaccine, were highly effective in preventing severe infections.

France, Germany and Italy have changed tack and are now giving the vaccine to people over 65.

Macron said last month the AstraZeneca jab was effective, and he would take it if offered.

But some doubts linger. Malika, a 54-year-old who works in a clinic for homeless people near Paris, said she turned down the AstraZeneca vaccine when offered it.

"I thought to myself: 'I don't really see the point of getting vaccinated with a second-rate vaccine'," said Malika, who did not want her family name published.

She said her mind was made up when a colleague had the shot and experienced side-effects. Malika said wanted to have the Pfizer jab, currently reserved for over-75s, instead.

Roger, the cancer survivor, said she lived alone, so was worried about coming down with a fever, one of the possible side-effects from COVID-19 vaccines, and had doubts about the AstraZeneca vaccine's efficacy against new variants.

But the big drawback, she said, was that she would have to wait until getting a second AstraZeneca shot in May to feel fully protected, an issue that would not arise with the one-shot Johnson & Johnson vaccine.

She has been to Yemen, Mali, and Madagascar, and the shelves of her home are decorated with artefacts she brought home. Since her cancer diagnosis, she said she realised she needed to make the most of the time she has, and get back on the road.

"Right now, AstraZeneca doesn't allow me to do that."