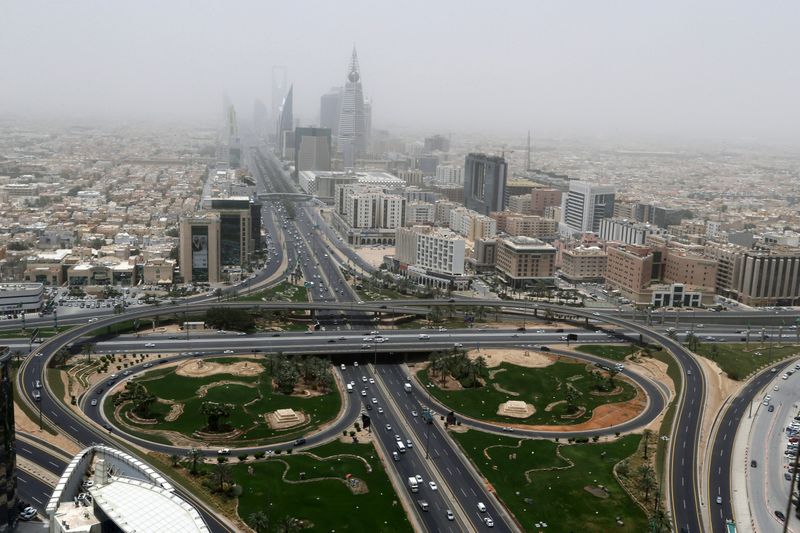 FILE PHOTO: General view of Riyadh city, after the Saudi government eased a curfew, following the outbreak of the coronavirus disease (COVID-19), in Riyadh, Saudi Arabia, May 7, 2020. REUTERS/Ahmed Yosri

By Yousef Saba and Saeed Azhar

RIYADH (Reuters) - Saudi Arabia's push for firms to set up regional headquarters in Riyadh is proving successful and is not aimed at dismantling corporate operations elsewhere, a senior Saudi official said.

The world's top oil exporter and largest Arab economy has given foreign firms until the end of 2023 to set up headquarters or risk losing out on government contracts as it competes for foreign capital and talent.

Fahd al-Rasheed, president of the Royal Commission for Riyadh City, told Reuters there has been "a lot of success" in attracting multinationals and that details would be announced at Saudi's flagship investment forum FII which starts on Tuesday.

"Companies want to move here. Once they learn about the investment opportunities and the kinds of full offer that we provide them, they immediately decide to (come)," Rasheed said, speaking on the sidelines of a Saudi climate forum on Saturday.

"It's not about dismantling what companies are doing in other cities in the region," he said, also urging multinationals without a regional presence to set up shop.

Saudi Arabia has yet to disclose how many companies have relocated under the drive by Crown Prince Mohammed bin Salman to make the kingdom a regional business hub, putting it in competition with commercial centre the United Arab Emirates.

Several foreign companies, including PepsiCo, Schlumberger and Bechtel, agreed earlier this year to set up regional offices in Saudi Arabia rather than overseeing operations remotely from Dubai.

"We're giving incentives per sector, it's not a blanket incentive process," Rasheed said, adding that it would be "super easy" to lure the investment banking sector.

He cited Prince Mohammed's plan to wean the economy off oil by building new industries and launching megaprojects, and a specific strategy for Riyadh due to be announced soon.

"Just the Riyadh Sustainability Strategy, it's a $40 billion investment opportunity for the private sector. This needs to be structured by investment banks, so the opportunity is unprecedented across the globe," he said.

Saudi Arabia plans in the next decade to double the population and economy of its capital city, currently home to some 7 million people, and has moved to improve quality of life.