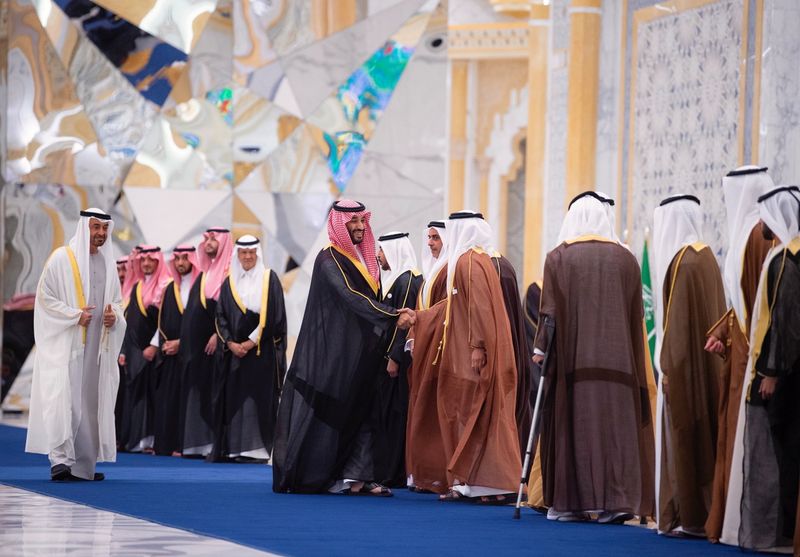 DUBAI (Reuters) - Saudi Crown Prince Mohammed bin Salman, on a tour of the Gulf region, arrived on Tuesday in the United Arab Emirates, an ally locked in a growing economic rivalry with the kingdom.

He was met by the UAE's de facto ruler, Abu Dhabi Crown Prince Mohammed bin Zayed, on arrival in the capital Abu Dhabi on a two-day visit, state media said.

The tour comes ahead of a Gulf summit this month amid talks between Tehran and world powers aimed at salvaging a 2015 nuclear pact, a deal Gulf Arab states have criticised for not tackling Tehran's missiles programme and regional behaviour.

The ambitious princes of Riyadh and Abu Dhabi had forged an alliance that propelled a hawkish foreign policy which saw them launch a military campaign in Yemen, lead an Arab boycott of Qatar and lobby Washington to take a tougher stance with Iran.

But economic rivalry and national interests have seen them chart separate paths, with differences first emerging in 2019 when the UAE withdrew its military presence in Yemen and started engaging with Iran, and then last year when it forged ties with Israel.

With Gulf uncertainty deepening over the U.S. role in the region, Riyadh this year began direct talks with Iran to contain regional tensions as Gulf states double down on economic growth.

Saudi Arabia is vying to become a regional commercial and tourism hub, a position long held by the UAE.

Prince Mohammed's visit comes after a top Emirati official visited Iran on Monday, the latest push by Abu Dhabi to mend ties with rivals including Turkey. Riyadh has been slower to respond to overtures by Ankara.

The Saudi prince is due to visit Qatar on Wednesday for the first time since 2017 when Riyadh and its allies boycotted Doha in a row that Saudi Arabia declared an end to last January.