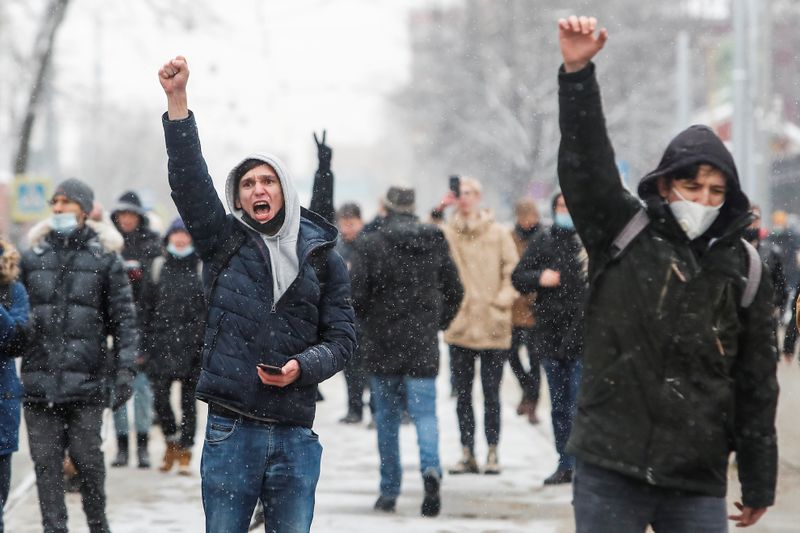 Leonid Volkov, who is wanted by Russian authorities on accusations he illegally encouraged minors to attend anti-Kremlin protests, made the call on the eve of a court hearing that could see Navalny jailed for three-and-a-half years.

Navalny, one of Putin's most prominent critics, was arrested last month after returning to Russia from Germany for the first time since being poisoned with a nerve agent. Navalny accuses Putin of ordering his murder, something the Kremlin denies.

"We very much hope that there will be tough sanctions against the people on whom Putin relies, against his money men and his inner circle. It will be an extremely unpleasant blow to Putin and punishment for his criminal acts," Volkov told Reuters in an interview by video call.

"This will give us intra-elite conflicts," he said, adding he hoped such a move would bring pressure from Putin's allies to end the crackdown on Navalny or to compensate them for any financial losses or travel bans resulting from sanctions.

The Kremlin on Monday said moves by Navalny's allies to encourage the West to hit Russia with sanctions showed they were acting as "foreign agents" and said any new sanctions would be unacceptable.

Vladimir Ashurkov, another Navalny ally, published a letter addressed to U.S. President Joe Biden on Saturday appealing for sanctions against businessmen and officials identified as being close Putin allies.

The Kremlin has cast Navalny as a CIA asset bent on destabilising he country, an allegation Navalny denies, and has said the protests calling for this release are illegal and risk spreading COVID-19.

Volkov, who is outside Russia and declined to give his location, has helped organise two successive weekends of protests demanding Navalny be freed.