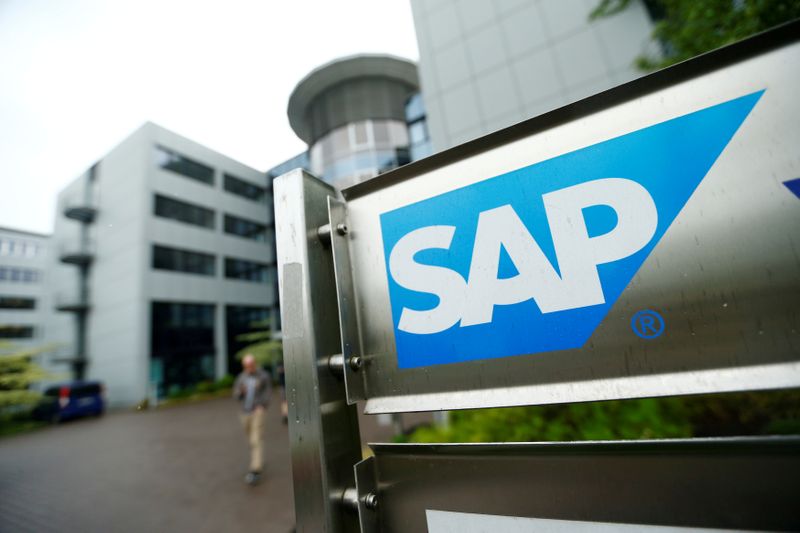 FILE PHOTO: The logo of German software group SAP is pictured at its headquarters in Walldorf, Germany, May 12, 2016. REUTERS/Ralph Orlowski

By Joshua Franklin and Niket Nishant

(Reuters) - Shares of Qualtrics International Inc jumped nearly 40% on Thursday in their Nasdaq debut, valuing the firm at nearly $21 billion, against the backdrop of a capital market frenzy that has seen investors flock to technology stocks.

Shares of the survey-software seller, owned by German business software giant SAP SE, opened at $41.85, after it raised about $1.55 billion in its upsized initial public offering.

The blockbuster debut underscores that investor appetite for high-growth tech stocks shows no signs of abating in the near term, even as U.S. capital markets hit record highs. Companies raised a record $168 billion through IPOs in 2020, according to data from Dealogic.

SAP agreed to buy Qualtrics in November 2018 for $8 billion, just as Qualtrics was getting ready for an IPO.

SAP Chief Executive Officer Christian Klein said last year floating the unit had been the only way to keep on board the Qualtrics leadership team led by founder Ryan Smith, who was unsettled by the departure of SAP's American co-CEO, Jennifer Morgan.

In an interview on Thursday, Smith said the goal of the IPO was to give Qualtrics greater flexibility to invest in growth areas, such as building on the 3,800 new customers gained in the past two years.

"We all came to the conclusion that in order to keep this team and the momentum behind Qualtrics, we all needed to go and let this bird run," Smith said. "There are times in a company's life cycle where you can minimally invest, and it'll chug along. This is not one."

Total revenue of Provo, Utah-based Qualtrics, which gathers real-time feedback from customers to help analyze how a firm's products or services are performing, rose about 32% to $550 million in the nine months ended Sept. 30.

Net loss also narrowed to $258 million during the period from $860.4 million a year earlier, as existing customers bought upgrades and new customers came on.

Morgan Stanley and JPMorgan are the lead underwriters for the offering.