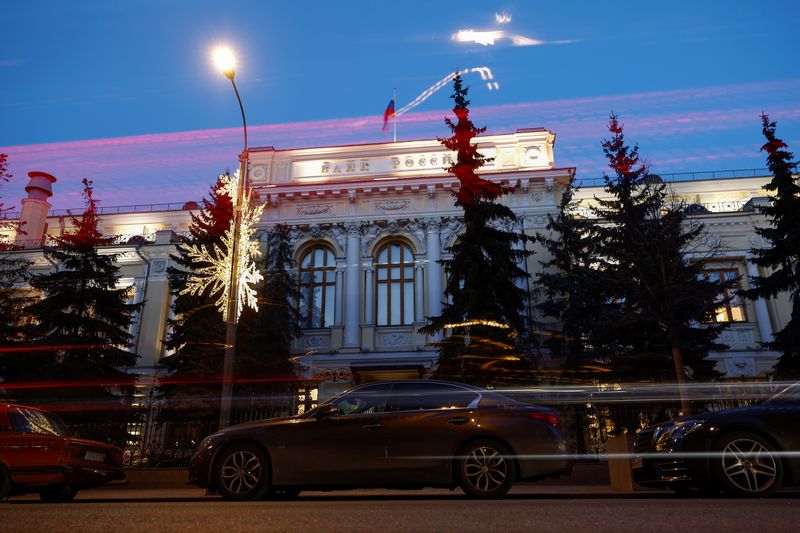 MOSCOW (Reuters) - Russia's central bank will raise its key interest rate on Friday by 25 or 50 basis points, amid high inflation and intensified geopolitical risks, a Reuters poll showed on Monday.

A rate hike became more necessary recently when the rouble took a hit from a new wave of sanctions and inflation, the central bank's main area of responsibility, showed little signs of slowing.

Seventeen of the 29 analysts and economists polled said the central bank would raise the key rate by 25 basis points to 4.75%, as it did in March.

Last month the central bank announced its plan to return to a neutral policy rate of 5-6% after slashing the rate to a record low of 4.25% in 2020 to prop up the economy amid the COVID-19 pandemic and a drop in oil prices.

Geopolitical risks were not the key factor behind the March rate hike, the bank's head of monetary policy, Kirill Tremasov, said in an interview with Reuters.

However, the United States has since barred its banks from buying new state debt directly from Russia from mid-June. The U.S. and European Union have both indicated they keep the door open for more sanctions against Moscow.

Such a backdrop batters the rouble, which in turn affects consumer prices. In March, annual inflation surged to 5.8%, its highest since late 2016, hovering above the 4% target.

All this prompted the market to start pricing in a bigger rate hike, with 11 of the polled experts said they expected the central bank to increase the benchmark to 5% this Friday.

"We have revised our previous forecast for a 25 bp (hike) amid stronger geopolitical risks and the weaker rouble," Gazprombank analysts said.

SOVA Capital also pointed at a "further surge in geopolitical risks" as a reason for a possible rate hike to 5%.

The rate decision is due at 1030 GMT on Friday, followed by an online media conference with Governor Elvira Nabiullina.