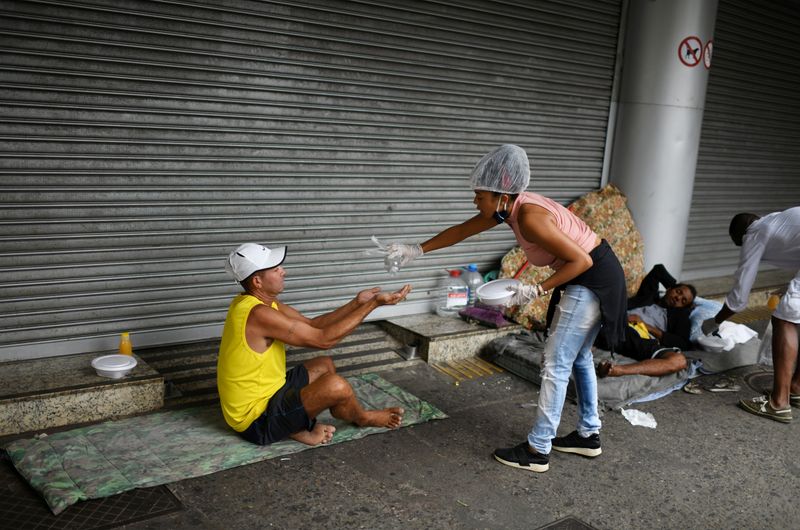 FILE PHOTO: A member of a group of residents of the Chapeu Mangueira slum, sprays alcohol on the hand of a homeless person as she delivers him food during the coronavirus disease (COVID-19) outbreak, at Copacabana beach in Rio de Janeiro, Brazil, April 11

SAO PAULO (Reuters) - The risk of going hungry in Brazil is higher than ever, as the percentage of people unable to afford food for themselves or their family at some point during the last 12 months rose to a record 36% in 2021, from 30% in 2019, a newly published study showed.

It is the first time that food insecurity in Latin America's largest food producer has surpassed the world average since the data tracking began in 2006, according to a new analysis of Gallup World Poll data released on Wednesday by the Getulio Vargas Foundation (FGV), a Brazilian academic institution.

Brazilians are facing this dire situation even though the country is one of the world's top agricultural goods producers. Food prices have risen sharply following Russia's invasion of Ukraine, said economist Marcelo Neri, director of FGV's Social Policies Center and the study's author.

"It is a worrying situation, the highest level of the series," Neri told Reuters.

The increase in food insecurity among the poorest 20% in Brazil during the pandemic rose to 75% in 2021, from 53% in 2019, nearing levels in Zimbabwe, which has the highest level of food insecurity in the world at 80%, the data showed.

The study also said that the gender gap in food insecurity in 2021 was six times greater in Brazil than the global average.