Republican leaders want a show of unity. Will Trump allow it? 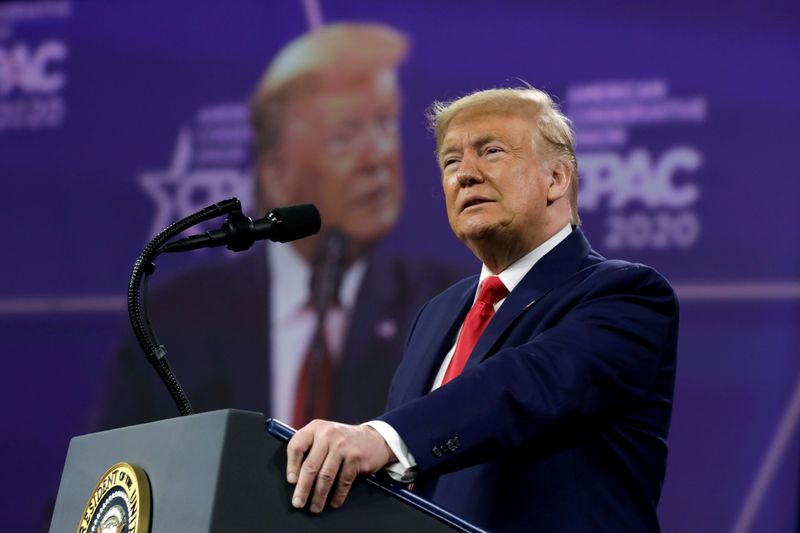 WASHINGTON (Reuters) - The next few days will give Republicans opportunities to stand together or fight among themselves, first when the House of Representatives votes on a $1.9 trillion coronavirus package on Friday and again when Donald Trump retakes the global spotlight in a speech to the party's most conservative members.

The Republican leaders in the Senate and House of Representatives - Mitch McConnell and Kevin McCarthy - have focused on rallying their caucuses against Democratic President Joe Biden's massive bill and away from internal hostilities over the Jan. 6 Capitol riot and former President Trump's impeachment.

But those efforts could prove hard to maintain when Trump speaks to the Conservative Political Action Committee on Sunday and likely wades into the party's efforts retake congressional majorities in 2022.

The potential for distraction was on full display at a Wednesday press conference, where House Republican leaders sought to blast the Democratic coronavirus bill.

Reporters used the opportunity to ask if leaders thought Trump should take the spotlight just two months after his supporters launched a deadly attack on the U.S. Capitol to press the former president's false claim that his election defeat was the result of widespread fraud.

"Yes, he should," McCarthy replied. But Representative Liz Cheney, the most senior of 10 House Republicans to vote to impeach Trump on a charge of inciting insurrection, was quick to contradict that view.

"I don't believe that he should be playing a role in the future of the party or the country," said Cheney, who survived an effort by Trump loyalists to oust her as conference chair for backing impeachment.

The struggle between the pro-Trump and anti-Trump arms of the Republican Party is a lopsided one.

Trump has already lashed out at his most senior Republican critic, McConnell, who called Trump "practically and morally responsible" for the Jan. 6 Capitol attack that killed five including a police officer.

"Mitch is a dour, sullen, and unsmiling political hack, and if Republican Senators are going to stay with him, they will not win again," Trump shot back last week.

McConnell has since tried to move on from discussing Trump, telling reporters: "What you need to focus on is how unified we are today in opposition to what the Biden administration is trying to do."

What's less clear is if Trump wants to move on. Many of the 10 House Republicans who backed his Jan. 13 impeachment are facing potential primary election challenges for 2022, when control of both chambers of Congress will be at stake.

Trump has expressed a desire to make those lawmakers pay by supporting their primary challengers, according to a Trump adviser. That could make him a wild card in both the 2022 election as well as the run-up to the 2024 presidential contest.

Trump has said he would consider running again, and the possibility alone will complicate plans for other potential Republican presidential contenders, including former Secretary of State Mike Pompeo and former Vice President Mike Pence.

Senator Rick Scott, who chairs the Senate Republican campaign arm known as the National Republican Senatorial Committee, said he was confident Trump would be a team player.

"I told him I want to win in '22 and said I'm going to be very specific of where I think he could be helpful, and he gets to make the decision whether he wants to do it or not," Scott said, though Trump has long shown a willingness to defy advice.

The Republican National Committee estimates that more than 25 million voters have been drawn to the party since Trump won the presidency in 2016. Trump's backers note he drew 74 million votes, more than any other Republican candidate in history, though that number was dwarfed by the 81 million people who voted for Biden in the record-setting November election.

Trump's vote numbers may make it difficult for the party to turn its back on him even if it wanted to.

"President Trump and populism are very much in the great majority of our party, and people like myself, who are more traditional conservatives, are a very small minority," Senator Mitt Romney, one of seven Republicans to vote to convict Trump of inciting insurrection this month told reporters.

Some of Trump's supporters were eager to fan the flames of conflict this week.

"The Establishment GOP wants to go back to forever wars, bad trade deals, and caravans crashing across our borders. We're not going back," Republican Representative Matt Gaetz said on Twitter. He urged Trump to run again in 2024.