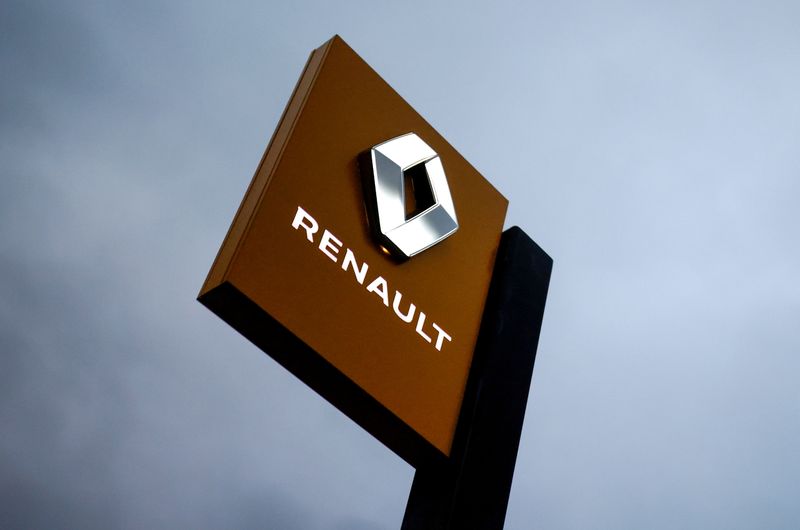 FILE PHOTO: The logo of carmaker Renault is pictured at a dealership in Vertou, near Nantes, France, January 13, 2021. REUTERS/Stephane Mahe

By Nick Carey and Gilles Guillaume

LONDON/PARIS (Reuters) -French carmaker Renault said on Friday it expected to deliver a full-year 2021 profit even as a global shortage in semiconductor chips and rising raw material costs crimped production.

Renault said it now expected the chip shortage to lead to a production loss of 200,000 units this year, doubling its previous forecast.

The carmaker, which has been focusing more on its most profitable models, reported a return to half-year net profit after a hefty loss a year ago, crediting rising car sales and its pricing efforts.

Renault, which also owns Dacia and Lada brands and has a partnership with Nissan, reported an operating margin of 2.8% for the first half of the year, saying it was aiming for a full-year margin "of the same order". It added it was ahead of its cost cutting targets.

These results "mark only the first step in our turnaround, which should accelerate with arrival of the new vehicles in preparation," Chief Executive Officer Luca de Meo, who started a year ago, said in a statement.

Renault almost returned to positive cash flow in the first half of the year, from a nearly 6.4 billion euro outflow in the year-ago period, and executives said they hoped to keep that momentum going.

Renault plans to repay around a fifth of a 5 billion-euro loan from the French state by year end, Chief Finance Officer Clotilde Delbos said. The loan was part of government emergency support offered at the start of the coronavirus pandemic.

Last month, Renault unveiled a more ambitious strategy for electric vehicles (EVs), betting on new, affordable versions of its iconic small cars of the past to catch up with Volkswagen in the fast-growing sector.

After five consecutive quarters of falling car sales, Renault's revenue for the first half of 2021 rose 18.7%.

CEO De Meo, a former Volkswagen executive who turned the German automaker's Seat brand around, has been tasked with helping Renault turn a new page after a troubled spell.

De Meo's turnaround plan - which he calls a "Renaulution" - includes laying off thousands of workers, cutting the carmaker's model range, and improving cooperation on production with its alliance partners - Nissan and Mitsubishi.

Former boss Carlos Ghosn was ousted and arrested in Japan in 2018 on charges of financial malpractice, which he denies. Ghosn left behind a sprawling model range with low margins, and Renault racked up heavy losses when global demand for cars fell.

The French carmaker said last month that by 2030 the Renault-Nissan-Mitsubishi alliance would produce one million EVs globally a year, up from the 200,000 they made in 2020.

Nissan surprised with a first-quarter profit and raised its earnings outlook on Wednesday.