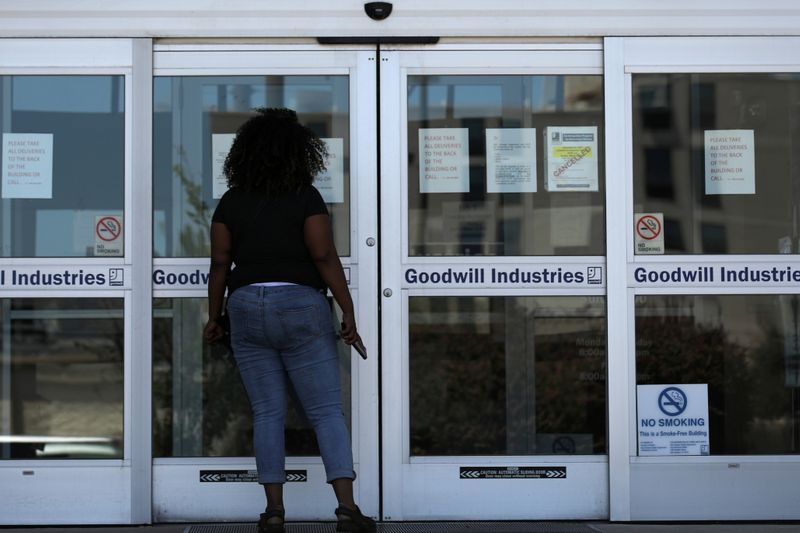 FILE PHOTO: A woman looks for information on the application for unemployment support at the New Orleans Office of Workforce Development, as the spread of coronavirus disease (COVID-19) continues, in New Orleans, Louisiana U.S., April 13, 2020. REUTERS/Ca

WASHINGTON (Reuters) - A stunning 26.5 million Americans have sought unemployment benefits since mid-March, confirming that all the jobs gained during the longest employment boom in U.S. history have been wiped out as the novel coronavirus savages the economy.

The deepening economic slump amid nationwide lockdowns to control the spread of COVID-19, the potentially lethal respiratory illness caused by the virus, was underscored by other data on Thursday showing business activity sinking to an all-time low in April. In addition, new home sales decreased by the most in more than 6-1/2 years in March.

"At this point it would take a miracle to keep this recession from turning into the Great Depression II," said Chris Rupkey, chief economist at MUFG in New York. "The risks to the outlook are that the economy is digging itself such a big deep hole that it will become harder and harder to climb back out of it."

Initial claims for state unemployment benefits totaled a seasonally adjusted 4.427 million for the week ended April 18, the Labor Department said. That compared to 5.237 million in the prior week. Economists polled by Reuters had forecast 4.2 million claims in the latest week.

Since March 21, 26.453 million people have filed claims for unemployment benefits, representing 16.2% of the labor force. That has led to dire predictions of 30 million job losses during the COVID-19 pandemic and an unemployment rate at levels not seen since the Great Depression. The economy created 22 million jobs during the employment boom which started in September 2010 and abruptly ended in February this year.

The rising tide of grim economic numbers has been met with protests, which have largely been viewed as political, for states and local governments to reopen non-essential businesses. President Donald Trump, who is seeking a second term in the White House in November's general election, has also been growing anxious to restart the paralyzed economy.

A handful of Republican-led states are reopening their economies, despite warnings from health experts of a potential new surge in infections. Economists also warn that there is no guarantee that Americans will feel safe to visit shopping malls.

"Today's report shows the labor market is almost certainly pushing into new territory, jolting the unemployment rate up above the Great Recession's 10% peak and wiping out more jobs than we've gained in the recovery," said Daniel Zhao, senior economist at Glassdoor, a website recruitment firm.

In a separate report on Thursday, data firm IHS Markit said its flash U.S. Composite Output Index, which tracks the manufacturing and services sectors, plunged to a reading of 27.4 this month, the lowest since the series began in late-2009, from 40.9 in March.

New home sales fell 15.4% to a seasonally adjusted annual rate of 627,000 units in March, the Commerce Department said in another report. The percentage decline was the largest since July 2013.

The National Bureau of Economic Research, the private research institute regarded as the arbiter of U.S. recessions, does not define a recession as two consecutive quarters of decline in real GDP, as is the rule of thumb in many countries. Instead, it looks for a drop in activity, spread across the economy and lasting more than a few months.

Last week's claims report covered the period during which the government surveyed business establishments for the nonfarm payrolls component of April's employment report. Economists are forecasting as many as 25 million jobs were lost in April after the economy purged 701,000 positions in March, which was the largest decline in 11 years.

Though weekly jobless filings remain very high, last week's 810,000 decrease in claims marked the third straight weekly decline in applications, raising hopes that the worst may be over. Weekly claims appeared to have peaked at a record 6.867 million in the week ended March 28.

Stocks on Wall Street were trading higher as investors focused on the weekly decline in claims. The dollar slipped against a basket of currencies. U.S. Treasury prices were trading mostly lower.

Florida, which together with Tennessee, South Carolina and Georgia is reopening businesses this weekend, continued to see a surge in claims last week. But New York and Michigan reported fewer applications. Georgia reported a drop in claims.

The overall decrease in claims has been attributed to difficulties by states in processing large volumes of applications and a historic $2.3 trillion fiscal package, which made provisions for small businesses to access loans that could be partially forgiven if they were used for employee salaries.

An additional $484 billion in a fresh relief package for small business loans is expected soon. The handful of states easing restrictions could serve as a barometer for the overall economy when it reopens.

"We would assume jobless claims will fall back sharply here, but if consumers remain reluctant to go shopping or visit a restaurant due to lingering COVID-19 fears, then employment is not going to rebound quickly," said James Knightley, chief international economist at ING in New York.

"As such it would be another signal that a V-shaped recovery for the U.S. economy is highly unlikely."

With weekly claims stabilizing, the focus is shifting to the number of people on unemployment benefits rolls. The so-called continuing claims data is reported with a one-week lag.

Economists believe some people thrown out of work because of state-mandated "stay-at-home" orders found employment at supermarkets, warehouses and delivery services companies. They expect the unemployment rate will shatter the post-World War Two record of 10.8% touched in November 1982.

The jobless rate shot up 0.9 percentage point, the largest single-month change since January 1975, to 4.4% in March.