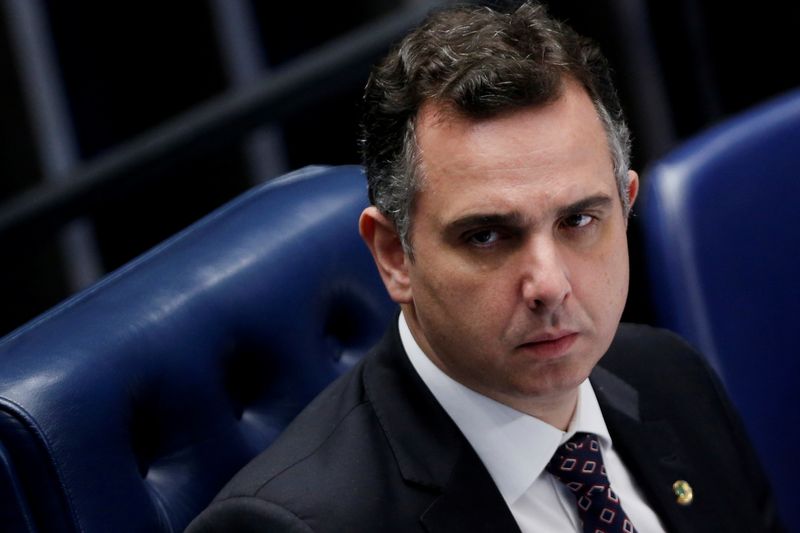 FILE PHOTO: President of Brazil's Senate Rodrigo Pacheco looks on during a session of the Federal Senate in Brasilia, Brazil March 3, 2021. REUTERS/Adriano Machado

BRASILIA (Reuters) - Brazil's Jair Bolsonaro is facing growing calls to replace his Foreign Minister Ernesto Araujo over failures in the country's COVID-19 response, the latest sign of mounting pressure on the president to improve his handing of the pandemic.

Senate President Rodrigo Pacheco said on Thursday that Brazil's foreign policy must improve, adding that it was up to Bolsonaro to decide if he would replace Araujo. A close ideological ally of the president, Araujo has faced criticism for his barbs against vaccine superpower China and struggles to secure shots from the U.S. stockpile.

The rising pressure on Araujo mirrors that on the president, who has been facing calls to get a better grip on an outbreak that has killed more than 300,000 people - the world's second-highest COVID-19 death toll after the United States.

Brazil is facing a record surge in deaths and cases that has cast Bolsonaro's skeptical stance on vaccines, masks and lockdowns in an increasingly unflattering light.

Sources close to the president told Reuters that Bolsonaro would rather not lose Araujo, an avowed fan of former U.S. President Donald Trump who has struggled to make headway with the new Joe Biden White House. But the sources also said Araujo was not on a firm footing. One, who declined to be named, said they ultimately expected the president to ditch Araujo.