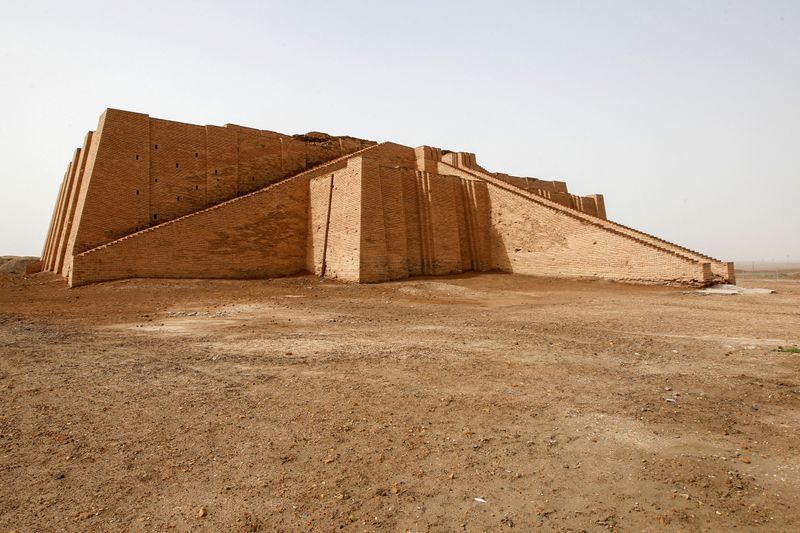 A general view shows the Ziggurat of Ur ruins, ahead of the planned visit of Pope Francis, in Ur near Nassiriya, Iraq February 18, 2021. REUTERS/Alaa Al-Marjani

BAGHADAD (Reuters) - Pope Francis is due to hold an inter-religious prayer service at the ancient Mesopotamian site of Ur when he visits Iraq next week - an event local archeologists hope will draw renewed attention to the place revered as the birthplace of Abraham.

Popular with Western visitors in the 1970s and 1980s, Ur is scarcely visited today after decades of war and political instability shattered Iraq's international tourism industry. The coronavirus crisis now also keeps local tourists away.

Located about 300 km (200 miles) south of the capital Baghdad, the site comprises a pyramid-style Ziggurat and an adjacent residential complex as well as temples and palaces.

It was excavated about 100 years ago by Leonard Woolley, a Briton who recovered treasures rivalling those found in Tutankhamen's tomb in Egypt. But little work has since been done

on one of the world's oldest cities, where urban dwelling, writing and central state power began.

According to the State Board for Antiquities and Heritage director for Ur, Ali Kadhim Ghanim, the complex next to the Ziggurat dates back to about 1900 BC.

The father of Judaism, Christianity and Islam, Abraham is described in the biblical book of Genesis as living in the city before God called upon him to create a new nation in a land he later learned was Canaan.

"This is why it is believed that this building, or house, was the house of the prophet Abraham," Ghanim said, pointing at the residential complex.

According to Ghanim, the housing settlement was restored in 1999, after Pope Francis' predecessor, Pope John Paul II, announced a trip to Iraq. But his visit was cancelled when negotiations with the government of then-Iraqi leader Saddam Hussein broke down.

This time, Ghanim hopes that Pope Francis' visit will attract international attention to the site, which he says is badly needed to fund restoration works on its palaces and temples.

"Not only tourism, but we believe that there will be a Christian pilgrimage season," Ghanim said.

Un Ponte Per, an Italian-based organisation, is working with the United Nations Development Programme on infrastructure works such as paths, rest areas and signposts to help visitors.

Roads around the site are being rennovated and powerlines extended ahead of the pope's visit.

But without adequate funding, Ghanim says his administration has been limited to containing further damage to the site, such as digging trenches to divert rainwater from the ruins.

Basra's Archbishop Habib al-Naufaly stressed the symbolic importance of the pope's March 5-8 visit as Iraq is still recovering from the war against Islamic State that destroyed scores of Christian heritage sites.

The inter-religious prayer service will be attended by Christians, Muslims, Mandaean-Sabaean, Yazidi and other religious minorities present in Iraq.

The focus will be on harmony between religious groups in a service the Vatican has named "Prayer for the sons and daughters of Abraham".