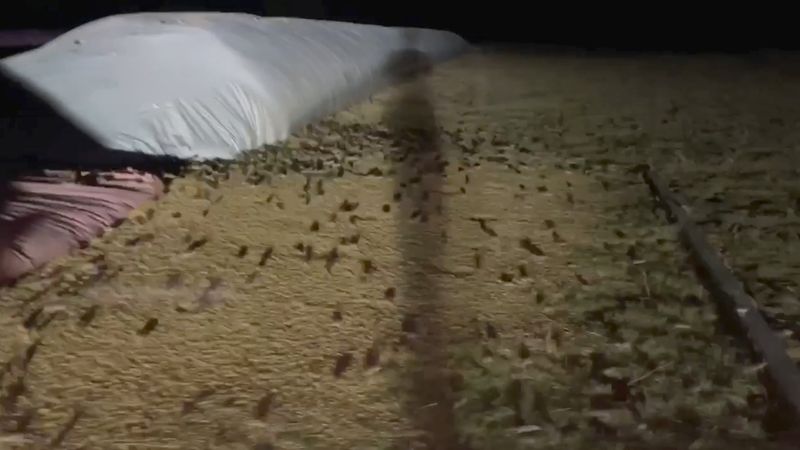 Mice run away on a farm in Gilgandra, New South Wales, Australia March 12, 2021 in this still image obtained from a social media video. MELANIE MOERIS/via REUTERS

SYDNEY (Reuters) - Some rural communities in the Australian state of New South Wales are suffering their worst plague of mice in decades after a bumper grain harvest, local people said.

Eyewitness video obtained by Reuters showed thousands of the tiny rodents swarming around a farm in the town of Gilgandra.

"At night... the ground is just moving with thousands and thousands of mice just running around" farmer Ron Mckay told the Australian Broadcasting Corporation.

Supermarkets are storing food in sealed containers and at least three patients in the local hospital have been bitten by the mice, the broadcaster said.

"And they're eating into your food containers, they're fouling your clean linen in your linen cupboard, they're running across your bed at night."

Farmers who made hay bales for the winter expect to lose many to the fast-reproducing rodents. Local media reported that just one pair of mice can produce on average up to 500 offspring in a season.

Intensive baiting programmes have so far had little success against the infestation, and locals are hoping for heavy rain to drown the mice in their burrows.

(Reporting by Jill Gralow and Paulina Duran in Sydney; Editing by Gareth Jones)