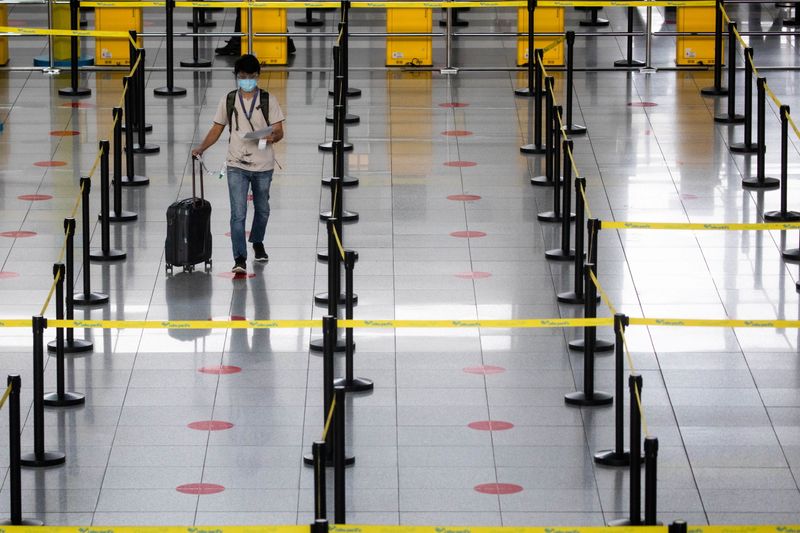 FILE PHOTO: A passenger wearing a face mask and face shield for protection against the coronavirus disease (COVID-19) walks towards a counter in the Ninoy Aquino International Airport in Paranaque, Metro Manila, Philippines, January 14, 2021. REUTERS/Eloi

MANILA (Reuters) - A wider lockdown in the Philippines cannot be ruled out if its surge in COVID-19 infections continues, its health minister said on Wednesday, as authorities announced strict curbs on international arrivals to arrest the virus spread.

The government is facing renewed criticism over its handling of the epidemic after a jump in coronavirus cases - nearly 20,000 in the past four days - a year after it imposed one of the world's strictest and longest lockdowns.

Officials attribute the spike to a relaxing of some mobility restrictions to allow people to return to work and revive the economy after a 9.5% contraction last year, Southeast Asia's deepest economic slump.

"If nothing changes and cases continue to rise, then the possibility of a more widespread lockdown is strong," Health Secretary Francisco Duque told ANC news channel, adding he hoped that could be averted in the coming days.

Though some curbs have been eased, many restrictions have been in place for a year, including inter-regional movement and the closure of schools.

For one month from March 20, foreigners and some returning citizens will be barred from entering the country, its coronavirus task force said late on Tuesday.

Accredited officials of foreign governments, returning Filipino workers and emergency cases will be exempted. It has also capped arrivals to 1,500 per day at its main airport.

The capital region, home to least 13 million people, has imposed a two-week curfew and ordered anyone below 18 to stay indoors.

Several Manila hospitals have sounded the alarm as critical care facilities near capacity, although health authorities say they can cope.

Many experts say all sectors are to blame for the rise.

"We have to be humble enough to admit we all have failed in so many aspects in terms of our preventive measures at both personal and institutional levels," Aileen Espina, a public health specialist, told ANC.