Philippines refuses to work with ICC 'war on drugs' probe 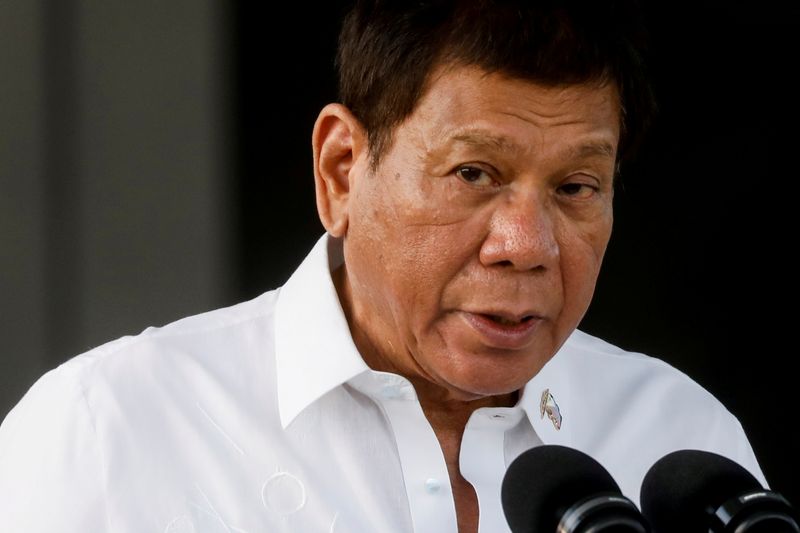 FILE PHOTO: Philippine President Rodrigo Duterte speaks during the arrival ceremony for the first COVID-19 vaccines to arrive in the country, at Villamor Air Base in Pasay, Metro Manila, Philippines, February 28, 2021. REUTERS/Eloisa Lopez

MANILA (Reuters) - The government of Philippine President Rodrigo Duterte on Thursday said it will not cooperate with an International Criminal Court (ICC) probe into his notorious war on drugs, or allow any investigators into the country.

Judges at the ICC on Wednesday approved a formal probe https://www.reuters.com/world/asia-pacific/international-court-approves-investigation-into-philippines-war-drugs-2021-09-15 into Duterte's bloody campaign, in which thousands of suspected drug peddlers have died, many executed by police, according to activists, who say law enforcement agencies have killed with tacit backing of the president.

Duterte and his police chiefs say killings were in self-defence, while his government insists the ICC has no right to meddle in the country's affairs.

"If there are complaints, it should be filed in the Philippines because our courts are working. The ICC has no jurisdiction," presidential spokesperson Harry Roque told a news briefing.

"When we became a party in the (ICC's) Rome statute, we did not surrender our sovereignty and jurisdiction."

Rights groups say many thousands more were assassinated in slum communities, mostly users killed by mystery gunmen who were never caught, and accuse police of involvement.

The judges in The Hague on Wednesday said prosecutors' materials showed the anti-drug campaign "cannot be seen as a legitimate law enforcement operation", but rather a systematic attack on civilians.

NO ENTRY FOR ICC

Presidential legal counsel Salvador Panelo on Thursday said ICC investigators would not be permitted to enter the country. Victims' lawyers, however, say interviews can be conducted virtually.

The ICC was set up to prosecute war crimes https://www.reuters.com/world/what-is-international-criminal-court-2021-05-13, genocide and crimes against humanity and has jurisdiction if a member state is unable or unwilling to do so itself.

The popular Duterte, 76, has dared the ICC to put him on trial and publicly said he would happily "rot in jail" for killing people intent on destroying his country.

But in March 2018 he unilaterally cancelled the Philippines' ICC membership https://www.reuters.com/article/philippines-duterte-icc-idINKCN1GQ0M8, a month after its prosecutor said a preliminary examination over the drugs war was underway. The ICC says it can investigate crimes committed while the Philippines was a member, up until 2019.

The investigation comes at a critical time for Duterte, who leaves office next year and cannot run for a second term.

He has confirmed he will seek the vice presidency https://www.msn.com/en-gb/news/world/philippines-duterte-accepts-2022-vice-presidential-nomination/ar-AAOdtJq, while his daughter, Sara Duterte-Carpio, a mayor, has this year been widely touted as a potential successor, moves critics believe are designed to insulate him from an indictment, at home or abroad.

"His best option is to support the candidacy of Mayor Sara," said political analyst Temario Rivera.