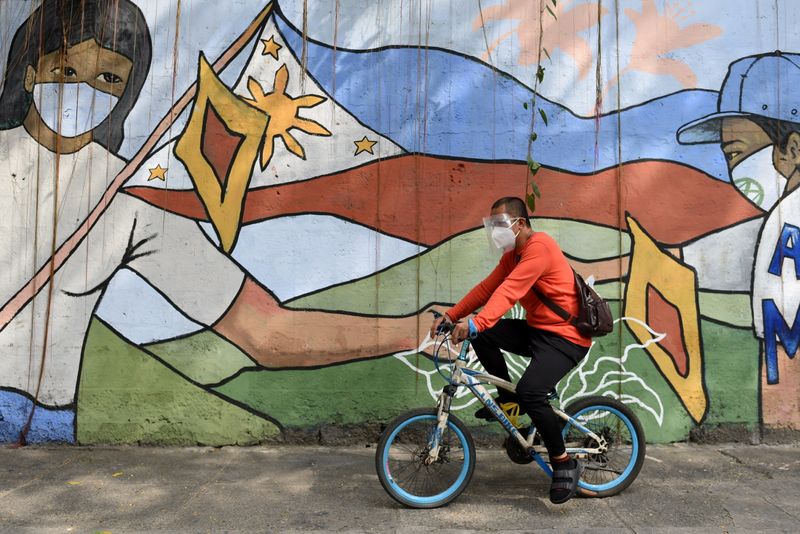 FILE PHOTO: A man wearing a face mask and a face shield as protection against the coronavirus disease (COVID-19) passes by a mural dedicated to frontline workers, in Manila, Philippines, January 11, 2021. REUTERS/Lisa Marie David

MANILA (Reuters) - The Philippines extended on Friday partial COVID-19 restrictions in the capital Manila until the end of February in a bid to slow a spike in infections after year-end holidays, officials said, warning the curbs could further delay economic recovery.

From one of Asia's fastest growing nations before the pandemic, the Philippines suffered its worst economic decline in 2020 as a strict coronavirus lockdown shuttered businesses and put millions out of work.

The Manila region, which accounts for 40% of the country's economic output and is home to at least 12 million people, remains the epicentre for the outbreak in the Philippines, which has the second-highest case load in Southeast Asia.

Some curbs have been gradually eased, but a new rise in the number of coronavirus infections and local transmission of a more contagious COVID-19 variant have prevented the Philippines from reopening its economy faster.

The presidential spokesman confirmed in a statement restrictions that include limited operations at shopping malls and dine-in eateries, as well as curbs on gatherings and public transport capacity, would be prolonged.

"There's no country that I know with a level of quarantine that is so broad, so deep and so long", Chua told foreign correspondents on Friday.

The Philippine economy contracted 9.5% in 2020, the biggest slump on record.

Manila on Friday also relaxed travel curbs on foreigners coming from more than 30 countries, including the United States and China, that have detected cases of the more contagious British variant of the coronavirus starting from next month.

The move covers foreigners previously allowed to enter the Philippines, including those holding work visas and spouses of Filipinos, but tourists would remain banned.