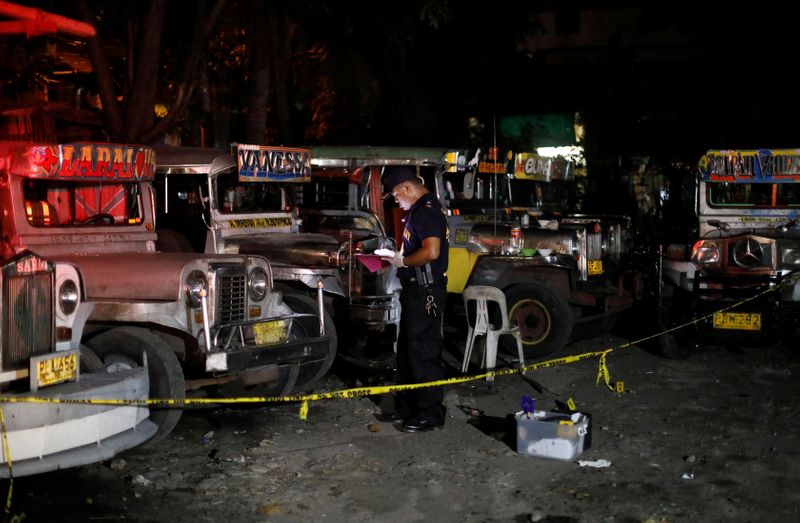 FILE PHOTO: A member of Philippine National Police Scene of the Crime operative examines a crime scene, where police said, a man was killed during anti-drug operations by the police in Caloocan city, Metro Manila, Philippines August 17, 2017. REUTERS/Eri

MANILA (Reuters) - Philippine police said on Thursday they were looking into a government review of thousands of killings in the country's "war on drugs", after the justice minister made an unprecedented admission to the United Nations of widespread police failures.

Guevarra's comments to the Human Rights Council mark the first time the government has publicly questioned its own narrative that the thousands of people killed in President Rodrigo Duterte's drugs war were all armed and had resisted arrest.

Activists accuse the government of turning a blind eye to systematic executions and cover-ups by police in a crackdown Duterte once warned could result in 100,000 deaths. Police deny allegations of murder.

Rights groups and victims' families have urged the International Criminal Court to indict Duterte for crimes against humanity.

Police spokesman Ildebrandi Usana in a text message said a team had been set up to "look into and discuss essential issues raised by the secretary".

Guevarra in his statement said the ministry had reviewed many incident reports where police said suspects were killed in shootouts.

"Yet, no full examination of the weapon recovered was conducted. No verification of its ownership was undertaken. No request for ballistic examination or paraffin test was pursued," he said.

"In more than half of the records reviewed, the law enforcement agents involved failed to follow standard protocols."

Contacted by Reuters, Guevarra said he had no further comment, but would build on his remarks "with concrete positive action".

Duterte's spokesman, Harry Roque, said the findings "prove that our domestic legal system is working and other institutions should not meddle".

John Fisher, HRW's Geneva director, said the Philippines was trying to head off an international investigation.

"If they can admit that their previous denials of police misconduct were false, what else are they hiding?" Fisher said.