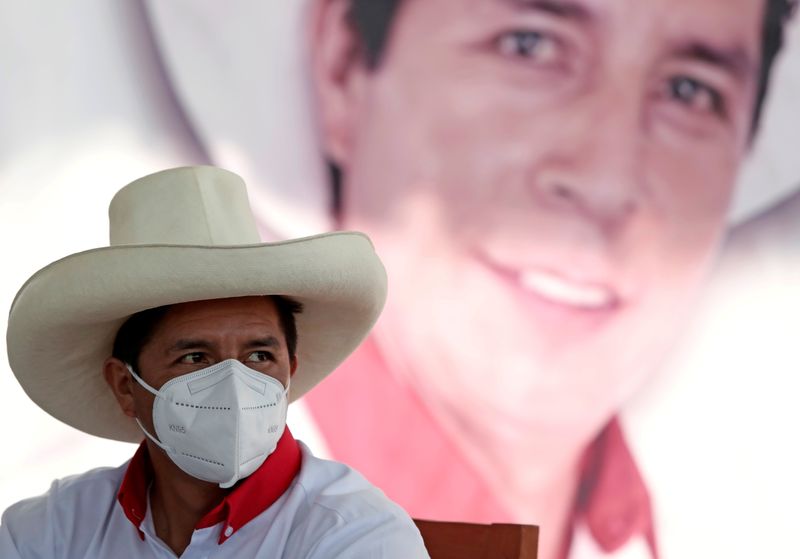 Castillo, a teacher and trade union leader who was politically unknown before this year's election, said in a document outlining plans for his first 100 days in office that he would strengthen the role of the state with a "mixed economy" approach and actively regulate monopolies and oligopolies.

He said he would use the increased revenue to substantially increase investment in education and health.

"For this we must nationalize our wealth, make it work for Peruvians," he said.

Castillo warned two weeks ago that if elected he would review contracts with foreign miners, whom he accused of "plundering" the country, to ensure 70% of their profits remained in Peru.

The 51-year-old, who sports a wide-brimmed hat and has struck a chord with Peru's less affluent voters, also wants to rewrite the constitution to weaken the business elite and give the state a more dominant role in the economy.

His rival Keiko Fujimori - a free-market proponent and daughter of ex-President Alberto Fujimori, who is in jail for human rights abuses and corruption - has also pledged to distribute Peru's mineral wealth more evenly.

Castillo until recently enjoyed a clear lead in the polls, but according to a voter simulation released at the weekend the gap between the two candidates has now closed.

Castillo justified his plan to up taxes, saying copper production costs in Peru - the world's second-largest producer of the red metal - are "the lowest in the world" while prices are at record highs.

He also pointed to a similar move being pushed through neighbouring Chile's congress by opposition parties amidst government warnings that it will crimp investment.

Castillo also voted to chase down tax avoiders and those in debt to the authorities, and impose import controls to support industry, particularly in clothing, footwear and agricultural sectors.