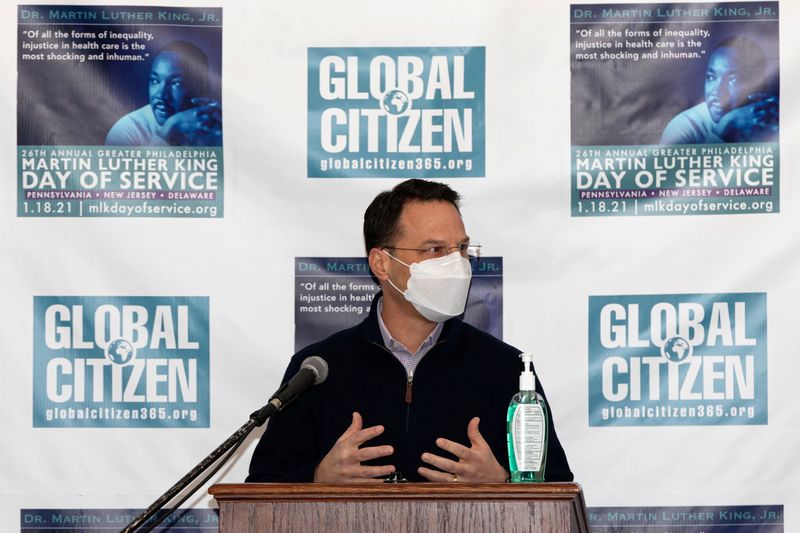 (Reuters) - Josh Shapiro, Pennsylvania's Democratic attorney general and a high-profile critic of former President Donald Trump, on Wednesday entered the 2022 race for governor, vowing to use veto power as a check on any efforts by Republicans to curtail abortion or voting rights in the battleground state.

Shapiro, seen as a rising star in the Democratic Party, delivered a speech with both moderate and progressive messages. He promised to reduce taxes to entice business investment while also boosting wages, expanding broadband internet access and lowering the cost of healthcare.

"I think we all know that Pennsylvanians need a governor who will take on the powerful and be on their side," Shapiro told supporters in Pittsburgh at an event launching his campaign.

The announcement makes Shapiro, 48, the early front-runner to become the Democratic Party nominee. No other Democrat has launched a campaign to succeed Democratic Governor Tom Wolf, who is constitutionally barred from running for a third four-year term.

The Republican field for the 2022 race currently numbers a half-dozen and is expected to grow, with most candidates jostling to secure an endorsement from Trump, the Republican Party's de facto leader. Lou Barletta, 65, a former U.S. congressman, and former U.S. Attorney Bill McSwain, 52, are among those who have already announced campaigns.

Pennsylvania is a battleground state, where presidential elections can go either way, and commands a large number of the electoral votes needed to win the White House. President Joe Biden, a Democrat, won the state by more than 80,000 ballots.

Shapiro, a former state representative and commissioner in Montgomery County just outside Philadelphia, has in recent months built up his national profile through frequent appearances on cable TV shows to criticize Trump's baseless claims of widespread fraud in the 2020 presidential election.

Last month, Shapiro filed a lawsuit in state court against Republican state lawmakers in a bid to stop their effort to subpoena detailed personal information on voters, including partial Social Security numbers, as part of their partisan review of the 2020 election. That legal dispute is continuing.

Without naming them, Shapiro said his Republican challengers were more focused on promoting lies about the 2020 election than in solving everyday problems. He noted that the ongoing election review was being funded by taxpayers.

"There's a cost to their lies. Not only are they doing real damage to our democracy, but they are holding us back from meeting this moment," Shapiro said, adding that, if elected, he would veto any law that infringed on voting or abortion rights.

"I won't hesitate to use that veto pen to protect you."

In an earlier online video announcing his candidacy, Shapiro also highlighted his work overseeing a grand jury investigation that in 2018 led to sexual abuse allegations against 300 Roman Catholic priests in six Pennsylvania dioceses.

Barletta sought to tie Shapiro to the far left of the Democratic Party and the policies of Wolf, who has come under Republican fire for business restrictions aimed at curbing COVID-19's spread.

"His policies are dictated to him by leftist activists," Barletta said in a statement.

Terry Madonna, a Pennsylvania political analyst, said he expected progressives, who have been at odds with Shapiro over instances when he supported police and for his relatively tough-on-crime stance, to eventually come around to back him.

Madonna said Shapiro had perhaps the highest profile of any attorney general in modern Pennsylvania history. He said that should help Shapiro as he took on the Republican nominee.

"I don't know anyone who has been more out and about," Madonna said. "He's all over the state."