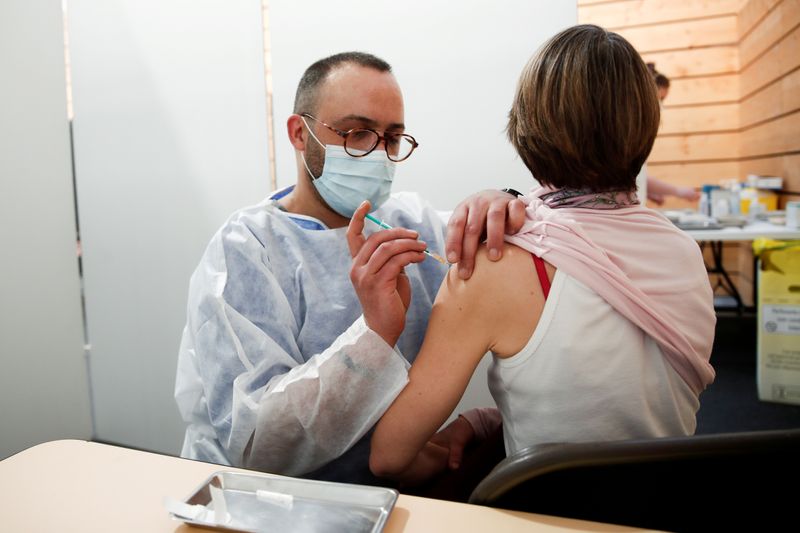 FILE PHOTO: A healthcare worker receives a dose of the Pfizer-BioNTech COVID-19 vaccine at a coronavirus disease vaccination center inside a gymnasium in Taverny near Paris, France, January 9, 2021. REUTERS

PARIS (Reuters) - French Prime Minister Jean Castex said on Tuesday that time had come for additional coronavirus restrictions in the greater Paris region as the country enters a third wave of the COVID-19 pandemic.

France is grappling with a steady rise of new cases, leading to a heavy strain on the hospital system, especially in the capital where infections have surged.

French health authorities reported 29,975 new cases nationwide on Tuesday, a 4.5% weekly jump, the sharpest in a month and a half.

"It seems to me that the time has come to consider new measures in the greater Paris region," Castex said in an interview on BFM TV.

Castex said weekend lockdowns such as those already in place in two other regions were among measures to be considered for the greater Paris region at a meeting on Wednesday.

"There is no reason why we shouldn't do in one region what we are doing in another," he said.

Like other EU countries, France has lagged far behind the United States or Britain in vaccinating its population.

President Emmanuel Macron still hopes a vaccination drive can stave off effects of a new pandemic wave triggered by more contagious variants, and prevent France from resorting to a third national lockdown.

But suspension of the use of the AstraZeneca vaccine, announced on Monday over safety concerns, could jeopardise the strategy.

Castex said he was ready to get the AstraZeneca vaccine if European health authorities confirmed its safety.

The health ministry said there were 4,239 patients in intensive care units for COVID-19, up by 20 over 24 hours and setting a nearly four-month high. The total number of people hospitalized for the disease was at 25,492, a high since Feb 24.