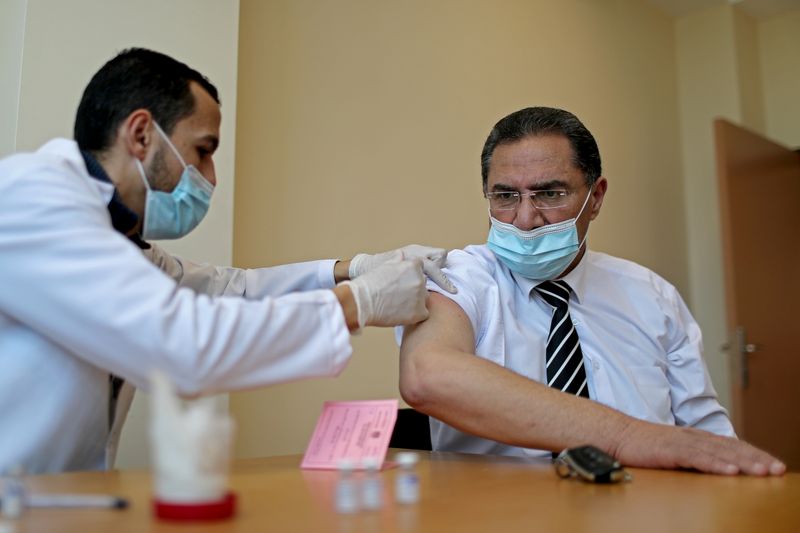 GAZA (Reuters) - Palestinians received 40,000 doses of Russia's Sputnik V vaccine on Thursday, a donation by the United Arab Emirates that could boost a long-time rival of Palestinian President Mahmoud Abbas ahead of an election.

Mohammad Dahlan, who fell out with Abbas and was dismissed from the president's Fatah party more than a decade ago, took credit for securing the shipment to Gaza from the UAE, where he lives in exile.

In a potential challenge to Abbas, Dahlan has announced plans to field a list of candidates he dubs "Fatah reformists" in a parliamentary election scheduled for May.

The vaccine shipment brought to 60,000 the number of Sputnik V doses that Dahlan has obtained for Palestinians since February, outpacing official Palestinian authorities.

Dahlan, in a statement, said the latest doses "aim to afford protection for our courageous medical teams and people with priority ... particularly the elderly and those suffering from certain (chronic) diseases".

He said half of the new shipment would be allocated to Palestinians in the Israeli-occupied West Bank, where Abbas's Palestinian Authority has limited self-rule.

It was not immediately clear whether Abbas would accept the donation and if so whether Israel would allow the vaccines to be transferred from Hamas Islamist-run Gaza to the West Bank through its territory.

"God-willing it will be an effective medication and that we will get rid of the pandemic," said Maha Addahouk after medics vaccinated her at a U.N.-run clinic in Gaza.

Gaza has registered more than 56,000 COVID-19 cases with 564 deaths among a population of two million.

The Palestinian Authority plans to cover 20% of Palestinians through the COVAX vaccine-sharing programme. But on Wednesday, the Palestinian health minister said COVAX shipments expected in March had been postponed until May.

Israel, a world leader in its vaccination rollout, has drawn international calls to do more to help Palestinians living in occupied territory fight the pandemic. It has begun vaccinating about 120,000 Palestinians with Israeli work permits.

Farid Mahdawi, the Palestinian Ambassador to China, told Voice of Palestine Radio on Thursday that 50,000 doses of the Chinese Sinopharm vaccine, half of the doses pledged by Beijing, would arrive in the West Bank within days.

(Additional reporting by Ali Sawafta in Ramallah and Mohammad Salem in Gaza; Editing by Jeffrey Heller and Janet Lawrence)