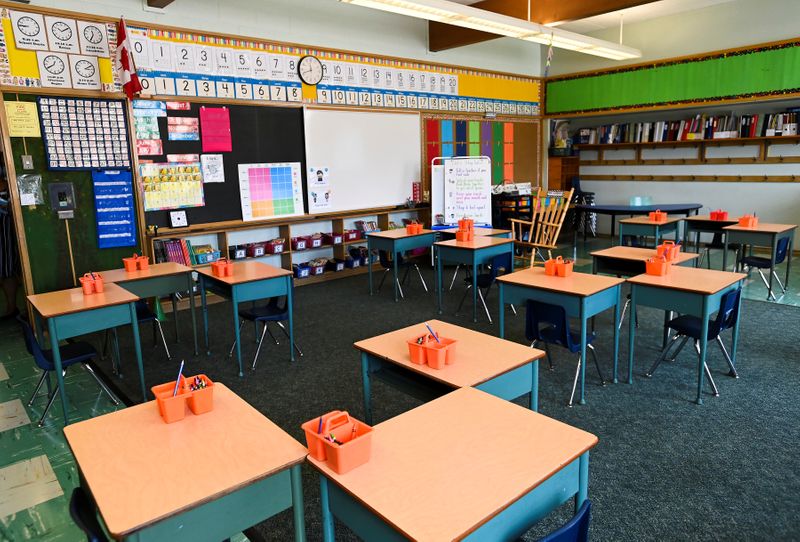 FILE PHOTO: A grade two classroom awaits students at Hunter's Glen Junior Public School, part of the Toronto District School Board (TDSB), a day before classes reopen for the first time since the beginning of the coronavirus disease (COVID-19) pandemic in

(Reuters) -The Canadian province of Ontario is closing schools for in-person learning due to rising variant-driven COVID-19 cases, Premier Doug Ford said on Monday without mentioning when the remote learning would end.

Canada's most populous province shuttered most businesses to in-store shopping and issued a four-week stay-at-home order last week, in addition to closing restaurants for both indoor and outdoor dining as ICU occupancy increased dramatically and hospitals began cancelling elective surgeries for the second time since the pandemic began.

"With COVID-19 spreading like wildfire, with these deadly variants taking hold in Ontario, we simply can't be too cautious right now," Ford said at a briefing in Toronto. "When it comes to keeping our kids safe I will never take unnecessary risk."

Ford said they will keep an eye on the data to determine when it is safe to resume in-person learning.

The government had until Monday insisted that schools were safe to keep open, but this position was weakened when the school board in Toronto, which accounts for 247,000 students and is the largest school district in Canada, shut in-person classes until April 18 last week.

"We will update parents once a date for a safe return to in-person learning is recommended," Stephen Lecce, the province's education minister, said.

Ford said he expected that 40% of adults in Ontario would be vaccinated by the end of the four-week stay-at-home order, if vaccine deliveries remained constant.

(Reporting by Moira Warburton in Vancouver, Editing by Franklin Paul and Chizu Nomiyama)