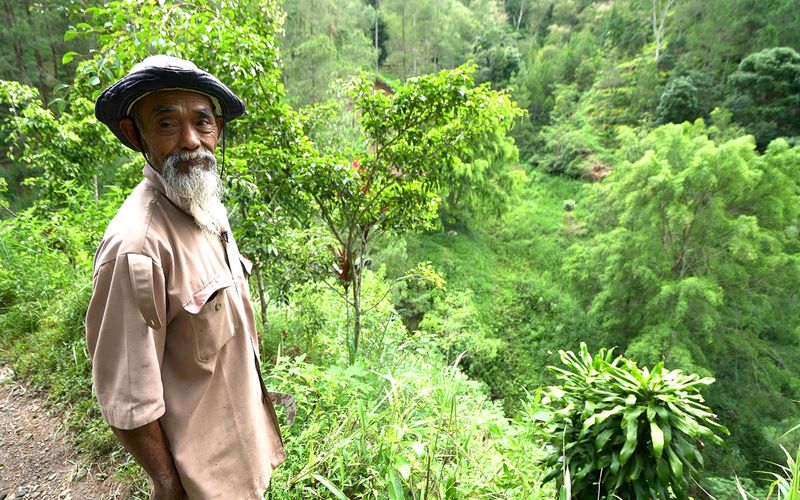 Sadiman, a 69-year-old ecowarrior, stands near a hill which is the first area he replanted with trees 20 years ago, in Wonogiri, Central Java province, Indonesia, in this still taken from March 13, 2021 video. Stringer/REUTERS TV via REUTERS

Affectionately addressed as 'mbah' or 'grandpa', the 69-year-old has worked relentlessly to plant trees in the hills of central Java after fires to clear the land for cultivation nearly dried up its rivers and lakes.

"I thought to myself, if I don't plant banyan trees, this area would become dry," said Sadiman, wearing his trademark ranger hat and safari shirt, who goes by one name, like many Indonesians.

"In my experience, banyan trees and ficus trees can store a lot of water."

The long and wide-spreading roots of at least 11,000 banyans and ficus trees Sadiman has planted over 250 hectares (617 acres) help to retain groundwater and prevent land erosion.

Thanks to his effort, springs have formed where once there was barren and arid land, their water piped to homes and used to irrigate farms.

Yet, at the beginning, few village residents appreciated his work.

"People ridiculed me for bringing banyan tree seeds to the village, because they felt uneasy as they believed there are spirits in these trees," Sadiman added.

Some even thought he was a madman because he bartered saplings for the goats he reared, said one villager, Warto.

"In the past people thought he was crazy, but look at the result now," Warto added. "He is able to provide clean water to meet the needs of the people in several villages."

Sadiman also funds his work through a nursery of plants such as cloves and jackfruit that he can sell or barter.

Lack of rain in the area where he planted trees had once limited farmers to a single harvest a year, but now, the abundant water sources ensure two or three, he said.

"I hope the people here can have prosperous lives and live happily. And don't burn the forest over and over again," Sadiman added, with a twinkle in his eye.