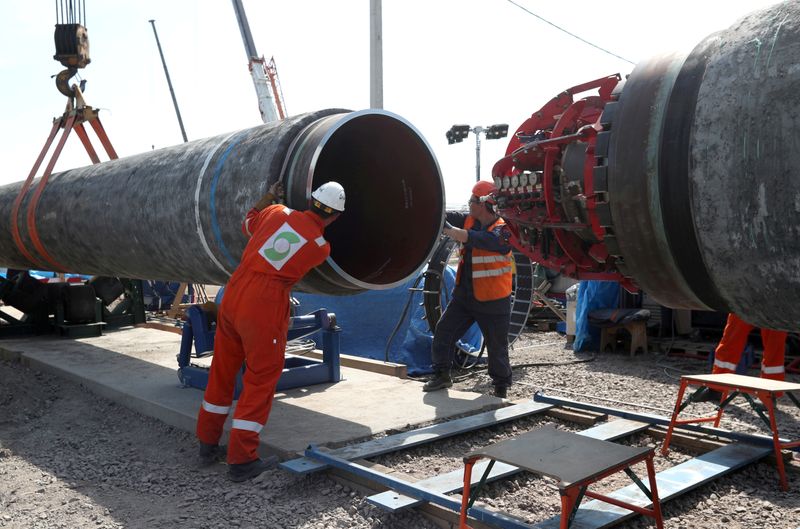 MOSCOW (Reuters) - The consortium behind the construction of the Nord Stream 2 gas pipeline warned on Thursday about security risks to the project from warships and planes, as the link is nearing completion.

The pipeline, aimed at bypassing Ukraine and doubling the capacity of the current Nord Stream undersea gas link from Russia to Germany, has been the focus of tensions between Moscow and Washington, which imposed sanctions against the project.

Andrey Minin, a senior official at the Nord Stream 2 AG consortium, told Interfax news agency that the project's fleet has been the target of "regular provocations by the foreign civil and military vessels".

In an emailed comments to Reuters, Nord Stream 2 AG said it could confirm Minin's statement, which "underlines the necessity to abide by the requirements of marine security".

According to Interfax, Minin said an unidentified submarine had emerged near the pipe-laying vessel Fortuna on March 28 less than a mile away.

He also cited several incidents with other vessels and said that the number of cases of low-flying "foreign planes" over the Nord Stream 2's vessels has increased in the second half of March.

U.S. Secretary of State Antony Blinken said in an interview broadcast on Sunday that it was ultimately up to those building the Nord Stream 2 pipeline whether to complete it despite opposition from Washington.

According to Nord Stream 2 AG, the pipeline is 95% complete and around 121 kilometre (75 miles) is left to be built.