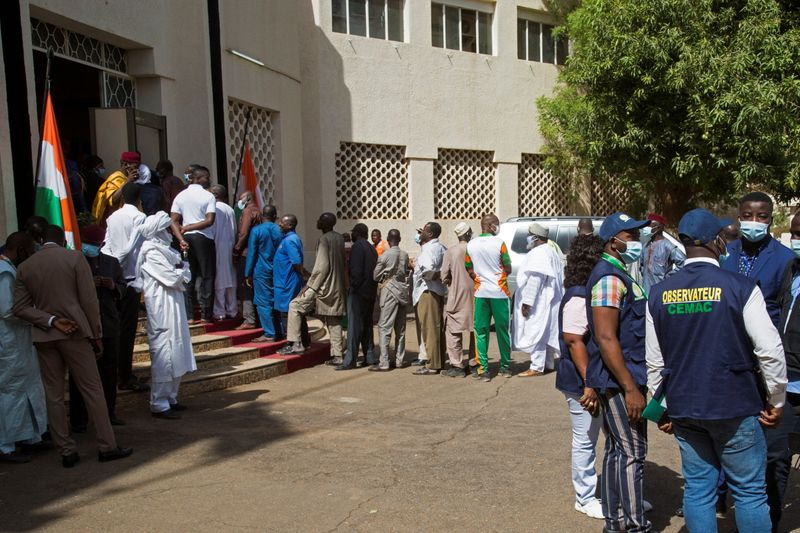 FILE PHOTO: Voters queue at a polling station during the second round of the country's presidential election, in Niamey, Niger February 21, 2021. REUTERS/Tagaza Djibo

NIAMEY (Reuters) - Ruling party candidate Mohamed Bazoum was declared the winner of Niger's presidential election on Tuesday while his opponent alleged fraud and opposition supporters burned tyres in the streets.

Bazoum, a 61-year-old former interior minister, won 55.75% of the vote in Sunday's election, according to the electoral commission. He beat Mahamane Ousmane, a former president who was toppled by a coup in 1996. The provisional results must still be confirmed by the constitutional court.

The election is meant to usher in Niger's first transition from one democratically elected leader to another, with President Mahamadou Issoufou stepping down after two five-year terms.

"I am profoundly thankful to the people of Niger for the confidence they have shown by electing me president of the republic," Bazoum said on Twitter. "I will be a loyal servant to it to confront all the problems that our country faces."

Shortly before the results were declared, Ousmane's campaign said there had been widespread fraud, including the theft and stuffing of ballot boxes and threats against voters. It did not provide any evidence.

"We demand the immediate suspension of the publication of these results, which do not in any way take into account the expressed will of the Nigerien people for change," Ousmane's campaign manager said in a statement.

Outside Ousmane's campaign headquarters and in other parts of the capital Niamey, his supporters protested by burning tyres. Police fired tear gas to disperse them.

The electoral commission has not yet commented on the allegations of irregularities. An observer mission from the Economic Community of West African States said the vote was held "under free, fair, credible and transparent conditions".

It was marred, however, by two attacks that killed eight people in two regions where Islamist militants are active, commission president Issaka Souna said.

Seven of the victims were election workers in the western Tillabery region, near the border with Mali, whose vehicle struck a landmine as they headed to the polls.